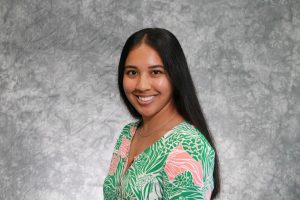 Geetika Patwardhan, a Spring 2023 Molecular Cell Biology Student worked with Dr. Ben Fogelgren’s NIH-funded laboratory at the University of Hawaii John A. Burns School of Medicine (JABSOM), and was also named a Goldwater Scholar in 2021 for her research. Geetika spent four years in the Fogelgren lab identifying new molecular mechanisms in neurons that regulate the production of amyloid-beta, a peptide that accumulates as plaques in the brains of Alzheimer’s disease patients.

Her work contributes several key discoveries to the field, including characterization of a new signaling pathway by which insulin directly affects amyloid-beta production in neurons. She is continuing her training at the National Institutes of Health campus in Bethesda, Maryland in the two-year Intramural Research Training Award program.

Miyamoto's thesis, “No Ke Kālaiwaiwai: The Elements of 19th Century Hawaiian Economics,” originally written in Hawaiian then translated into English, examines the unique nature of the ancient Hawaiian subsistence economy and the early economic development in the post-contact Hawaiian Kingdom under the rule of Kamehameha I until the Great Māhele. It makes extensive use of primary sources in ʻōlelo Hawaiʻi (Hawaiian) and English.

Brandy Dobson was one of only four scholars throughout the country chosen as a 2017 Portz Scholar by the National Collegiate Honors Council (NCHC), and receive the organization’s top prize for undergraduate honors students. Dobson presented her winning thesis at the NCHC conference in Atlanta in November 2017. Titled “A Murmur in the Weeds: A Memoir,” the work is an intimate and searing portrait of sisterhood and survival.

Jonathan Omuro was named a National Collegiate Honors Council 2016 Portz Scholar. The fall 2015 graduate presented his honors thesis on “Queering the Gay/Christian Intersection: An Exploration of Celibacy, Ex-gay, and the Christian Closet in Gay Christian Narratives” at the NCHC conference in Seattle in November 2016.