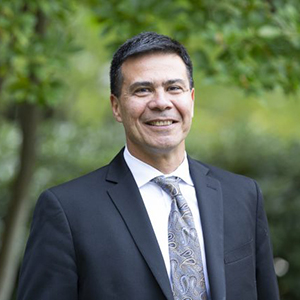 Long before Jorge Delva became the Dean of the Boston University School of Social Work and a national expert on health inequities, he was a teenager taking classes at Kapiʻoloani Community College and considering becoming an electrical engineer.

He had immigrated to Hawaiʻi from Chile at age 16, and it wasn’t easy.

“Although Hawaiʻi is a very welcoming place, I still faced challenges as an immigrant from a different culture. When I graduated from McKinley High School, I knew I wanted to translate those challenges into doing work that would help other people,” Delva says.

He learned about the field of social work from his mother, who had considered becoming a social worker before she became a teacher. Reading course descriptions for social work classes made him realize they were all about how to help society. “I realized that’s what I wanted to do,” Delva says.

He embarked on a career to study mental and behavioral health, and the role of culture in both. Over time, he completed his BSW, MSW, and PhD in social welfare all at the University of Hawaiʻi at Mānoa. Now, in his leadership role in Boston, his experiences in Hawaiʻi continue to influence him.

A key lesson came during an internship at the Salvation Army in Honolulu, where Delva was working with individuals and families struggling with substance use disorders. Around that time, Native Hawaiian leaders in Hawaiʻi were organizing a movement to revive Native Hawaiian culture. They were challenging the structures of colonialism and advocating for self-determination. For Delva, in his work at the Salvation Army, the role of culture in substance use disorders became strikingly clear.

“Most of what I was learning in my social work classes was from research conducted on the mainland, and it didn’t hold up very well with the social and economic justice problems we were having in Hawaiʻi,” he says. “We would tell people with substance use problems to skip family functions because the presence of alcohol could lead to relapse. But many struggled with this feedback as family relationships and interdependence are such strong values among the many cultures in Hawaiʻi. It became clear we needed to research other strategies to offer more culturally appropriate options.”

This realization sparked a desire to research the influence of culture on mental and behavioral health.

While living in Hawaiʻi, Delva embraced an active life. He joined an outrigger canoe paddling club and crossed the Molokai channel three times. He learned aikido and still practices it today. “The concepts of aloha and ohana profoundly impacted me in incredible ways,” he said. He met his wife, also an undergraduate and graduate student in social work, and they were married on Waimanalo beach by UH social work emeritus Professor Joel Fischer.

These days, Delva not only leads the BU School of Social Work and holds the Paul Farmer Professorship, he also directs the Center for Innovation in Social Work & Health and continues his research. In one recent paper, he and his co-authors found that although more people with mental health disorders are participating in internet support groups, there are differences between income levels and racial/ethnic groups in participation rates. Other work found that culturally adapted interventions are effective for people of color with substance use disorders. Delva speaks at national and international conferences on the role of social work science in social justice.

Many people at UH influenced him, Delva says. Dr. Velma Kameoka, Associate Vice Chancellor for Research emerita, and Dr. Noreen Mokuau, who recently retired as the Dean of the Thompson School, both influenced his early thinking about cultures and research projects. Dr. Eddie Wong, who taught statistics, was also influential as were many others.

As a dean, Delva still aims to change society. He works to open doors and create opportunities for early-career social workers and social work scientists. In his approach to working together as a team with his colleagues, he calls upon his experiences in Hawaiʻi.

“My training in the martial arts and canoe paddling was always about feeling connected with ways of life that emphasize interconnectedness by working alongside others – there is a spiritual aspect to all of this for me,” Delva says. “I constantly work to be a better person, and by working together with others, we can build a more positive society.”