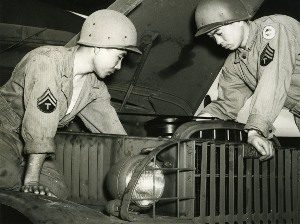 Hiro Higuchi served as a chaplain in the 442nd RCT during World War II. The collection includes wartime correspondence documenting Higuchi’s activities and impressions of the war, as well as life on the homefront in Hawaiʻi.

William Hiraoka was drafted into the war on November 14, 1941, before the bombing of Pearl Harbor and the classification of Japanese Americans as 4-C (Enemy Aliens). He was transferred to the Counter Intelligence Corps (CIC) in April 1942 where he served for the remainder of the war.

The Japanese Internment and Relocation Files: The Hawaiʻi Experience includes government and private documents, oral histories, and photographs that document the experiences of Japanese internees from Hawaiʻi during World War II.

Katsugo Miho served in the 522nd Field Artillery Battalion of the 442nd RCT. The collection contains wartime and postwar newspapers documenting the unit, speeches Miho gave in Germany in 2001, and oversized photographs of the early state legislature.

John Adrian Rademaker, a Professor of Sociology, published These Are Americans: The Japanese Americans in Hawaii During World War II in 1951 to document the contributions made to the war effort by of people of Japanese ancestry living in Hawaiʻi, including the Varsity Victory Volunteers, the 100th Infantry Battalion, and the 442nd RCT. His papers contain photographs, correspondence, and research materials related to the book.

Kiyoshi Sasaki served in the Military Intelligence Service. The collection consists of a book of dedications and photographs of his classmates during MIS training in Minnesota, and a scrapbook containing military documents and ephemera covering both the training period and his service in China and in post-war, occupied Japan.

Ted Tsukiyama is a veteran of the Varsity Victory Volunteers, 442nd RCT and the Military Intelligence Service (MIS). His papers collect research on the Hawaiʻi Territorial Guard, the Varsity Victory Volunteers, the 100th Infantry Battalion, the 442nd RCT, the Military Intelligence Service, the 522nd Field Artillery Battalion, the 1399 engineers, and the Office of Strategic Service.

Bishop Mitsumyo Tottori is believed to be the only Buddhist minister in Hawaiʻi who was not interned during World War II. The collection contains notebooks Tottori created containing the names of the Nisei soldiers he prayed for during World War II as well as the Vietnam and Korean conflicts. His family has provided translations for the World War II notebooks and various prefatory materials to the collection.

This collection includes interviews of former Varsity Victory Volunteers members done by Dr. Franklin Odo. The interviews are the basis of Odo’s book, No Sword to Bury.

Whitey Yamamoto served in the 442nd RCT. The collection, consisting largely of newspapers and other publications, documents the post-war activities of the veterans, and post-war media coverage of the war.

Israel Yost was chaplain to the 100th Infantry Battalion. His collection includes personal and official letters, photographs, and other wartime materials.