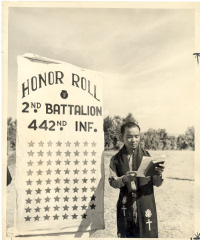 During World War II, Hiro Higuchi of Hawaiʻi volunteered to serve as one of two chaplains attached to the 442nd Regimental Combat Team, an all-Japanese American unit formed in January 1943. Following his enlistment, Higuchi attended the U.S. Army Chaplain School at Harvard University in the fall of 1943. In November 1943, he joined the soldiers of the 442nd RCT for intensive training at Camp Shelby, Mississippi. In June 1944, Higuchi accompanied the 442nd RCT to Europe, where he served with the unit in Italy and France. Chaplain Hiro Higuchi returned home to Hawaiʻi in December 1945.

As chaplain of the 442nd RCT’s 2nd Battalion, Higuchi did not engage in battle, though his duties enabled him to experience firsthand the nature of war. He provided comfort and solace to the troops, held religious services on the front lines, transported the wounded and dead from the battlefield, comforted injured soldiers at first aid stations, wrote letters to the families of those killed in action, held memorial services, and performed various administrative duties.

While serving with the 442nd RCT, Chaplain Higuchi wrote frequent letters to his wife Hisako reassuring her of his safety and documenting his experiences and impressions of the war. His descriptive letters provide insight into the mindset and experiences of the soldiers of the 442nd RCT and the nature of military life in World War II.

Hisako Higuchi also wrote frequent letters to her husband describing life at home in Pearl City, Oʻahu. She describes the daily activities of family and friends, as well as noteworthy happenings around the island. Her detailed accounts of daily life provide insight into the nature of Hawaiʻi‘s homefront during the war.

This website contains a selection of the letters exchanged between Chaplain Hiro Higuchi and his wife Hisako during World War II. The letters are listed in chronological order and are available in PDF format.

To learn more about the correspondence and other papers of Chaplain Hiro Higuchi, please see the Hiro Higuchi Papers Finding Aid.

Copyright Disclaimer: Copyright is retained by the authors of these materials, their descendants, or the repository if copyright has been signed over, as stipulated by United States copyright law. It is the responsibility of the user to determine any copyright restrictions, obtain written permission, and pay any fees necessary for the reproduction or proposed use of the materials.