Schedule an online appointment with us here!

Welcome to the Pre-Health/Pre-Law Advising Website! Please feel free to browse and contact us with any questions, Mahalo.

Peer advisors that are trained on all the health fields that advise on. All advisors are knowledgeable of the different pathways and resources for pre-health students to achieve their professional dreams!

Our physical office is closed until further notice.

However, we are available by phone and email.

We also have online advising available. To schedule an appointment with a Pre-Health or Pre-Law Peer Advisor or the Director, click here.

The current COVID-19 pandemic has highlighted the significance of healthcare and legal practitioners in society. To increase the number of professionals in these fields, the Pre-Health/Pre-Law Advising Center (PAC) at the University of Hawaiʻi at Mānoa is offering its semester workshop series virtually, from September to November, to reach as many college students and alumni as possible to help them explore legal and health professions.

These events are aimed to provide attendees with information in order to be accepted into law and health professional schools and in fields where there is extremely high need.

To read the rest of the article click here.

The significance and impact of healthcare professionals are highlighted more than ever with the COVID-19 pandemic The University of Hawaiʻi at Mānoa has worked to establish special Early Acceptance Programs (EAPs) with select institutions across the country to initiate early acceptance programs that would grant qualified students and/or alumni provisional acceptance into specific health professional doctoral programs.

The areas include dentistry, osteopathic medicine, pharmacy, and physical therapy. Providing these EAPs encourages and supports students who are interested in pursuing a career in these fields. EAPs are an excellent opportunity for students as admissions into these programs are extremely competitive.

To read the rest of the article, click here.

University of Hawaiʻi at Mānoa student Joshua Villaro wanted to become a doctor but needed serious, specific academic advising on how to get into medical school. So, in 2017, he turned to the UH Pre-Health Advising Center (PAC), which offers informational events and workshops like one on the ʻImi Hoʻōla Post-Baccalaureate Program at the John A. Burns School of Medicine (JABSOM).

It was the first time Villaro learned of ʻImi Hoʻōla, a 12-month post-baccalaureate program in the Department of Native Hawaiian Health designed to provide educational opportunities to students from disadvantaged backgrounds deemed capable of succeeding in medical school.

“The workshops were invaluable in providing me guidance for my medical school journey, as well as introducing me to the ʻImi Program,” said Villaro. “I am very grateful to PAC.”

To read the rest of the article, click here.

5 things you need to know about antimicrobial resistance

Recently, Global leaders met at the United Nationals General Assembly in New York to address what experts are calling one of the biggest threats to global health: antimicrobial resistance. It is only the fourth time in UN history that a health issue has been discussed at the assembly, after HIV, noncommunicable diseases such as obesity, and Ebola. Antimicrobial resistance, commonly called AMR, is when bacteria, viruses, fungi and parasites become resistant to the drugs typically used to treat people infected by them. The drugs, which previously would have cured people of an infection, are no longer effective in killing the microbes. Experts warn that everyone will be affected if nothing is done to address resistance as soon as possible. Drug-resistant bacteria are expected to kill 10 million people a year by 2050 -- that's one person every three seconds -- if nothing is done to solve the problem.For more information click here.

The flu shot has reduced the risk of infections in the United States by about half this season, according to the Center for Disease Control (CDC). The predominant virus strain this season is influenza A (H3N2) strain and the effectiveness of the vaccine toward this strain is 43%, and for influenza B, it is 73%, which amounts to an overall protection of 48%, the CDC said. In the 2014-2015 season, the effectiveness was 19%. For more information click here

This article suggests that spending time outdoors may improve your sleep, by a small study where they observed and took saliva samples from those who camped outdoors compared to those who stayed indoors. It showed that their was a shift in  "sleep hormones (melatonin)" from rising around sunset, and the camper's "biological night" kicked in about two hours earlier. This is important because there is evidence that shows that people with 'late' internal clocks face some health risks like obesity, diabetes, depression, and more likely to suffer daytime fatigue and accidents. That's why this study encourages you to get out in the sun when they can each day and minimize bright artificial light at night (cell phones or computer screens). Read more about it here.

Can burnt toast and roasted potatoes cause cancer? 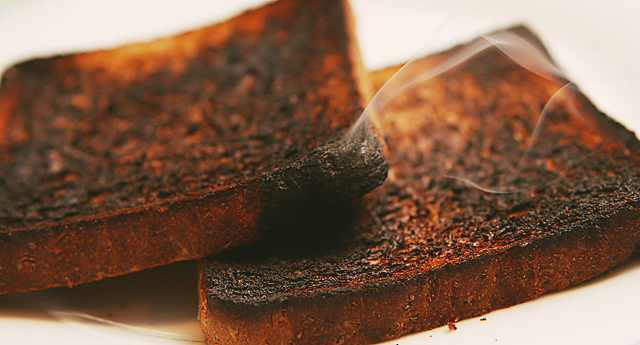 The Food Standards Agency in the UK launched a campaign Monday to warn about cancer risks linked to eating burnt toast, over-roasted potatoes and other starchy foods cooked at high temperatures. The campaign is based on longstanding evidence from animal studies in 2002, but the link is yet to be proved in human studies. Earlier mouse studies identified that high levels of a compound called acrylamide led to an increased risk of cancer. Acrylamide is what makes bread and potatoes turn golden in color when fried, baked, toasted or roasted. The compound is formed from simple sugars, such as glucose, reacting with an amino acid, known as asparagine, when these foods are cooked at temperatures above 120 degrees Celsius. If cooked for too long, these foods turn from golden to brown and eventually black. As they do, they produce higher levels of acrylamide, further increasing your cancer risk. Read more about it here.

U.N Plans to Pay Victims of Cholera Outbreak It Caused in Haiti

In 2010, United Nations peacekeepers introduced the cholera epidemic in Haiti, and since then, approximately 9,500 Haitians died and hundreds of thousands have been sickened; after Hurricane Matthew, the incidence of the disease surged. Cholera is an infectious disease that can be fatal and can spread through contaminated drinking water. In order to compensate those who suffered from cholera, the U.N plans to give about $200 million to the communities and to those who suffered, and another $200 million to help eradicate cholera and to improve sanitation in Haiti. However, “the basic details of the proposed package are still under discussion” as the U.N does not have the funds it needs for the $400 million cholera response package. Read more about it here.