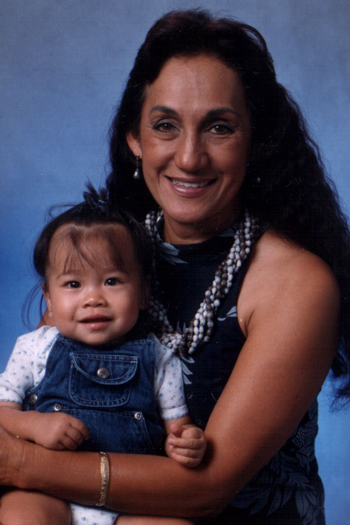 Vicky Holt Takamine  is the kumu hula (master teacher) of Pua Ali`i `Ilima, a school of traditional Hawaiian dance. She graduated through the `ûniki rituals of hula from Maiki Aiu Lake.

In addition, Vicky is the po`o (president) of `Îlio`ulaokalani, a coalition of traditional practitioners who are committed to protecting their Hawaiian customs and traditions, the president of KAHEA: The Hawaiian Environmental Alliance, a coalition of Hawaiian and Environmental organizations committed to protecting the natural and cultural environment of Hawai`i and co-founder and president of Aloha `Aina, a new Hawaiian political party.

Pua Ali`i `Ilima, under the direction of kumu hula Vicky Holt Takamine, participates in many cultural festivals throughout Hawai`i. The halau just returned from the Pan Pacific Hula Festival held in Tokyo, Japan. Vicky and the halau, along with students from UH Manoa participated in the national celebration of the 100th Anniversary of the University of Peking in Beijing, China at the Hong Kong International Dance Festival in Hong Kong and in the Honolulu -Seoul Sister City cultural exchange program.