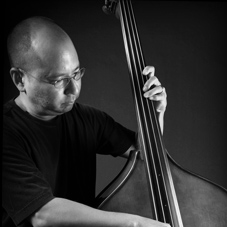 Dean Taba is a freelance bassist, composer, producer, and educator living in Honolulu, HI. He began his musical studies on the piano at the age of 6 and played french horn in the Hawaii Youth Symphony. It was a desire to play in the high school jazz band that introduced him to the bass and improvised music.

After studying at the Berklee College of Music in Boston, Dean moved in 1984 to Los Angeles to further refine his skills on both the Acoustic and Electric bass. For 20 years, Dean worked in the studios of LA with his musical heroes, mentors, and contemporaries recording countless albums, TV shows, jingles, movies, and video game soundtracks. He was even instrumental in creating Trilian, an award winning Virtual Instrument. In spite of a very busy recording and touring schedule, Dean made time to teach at The Dick Grove School of Music, Musician’s Institute, and the Los Angeles Music Academy, as well as recording three of his own albums.

He is now back home in Palolo Valley performing, teaching, recording, and producing some of Hawaii’s most influential and innovative artists. And he is very excited to be director of the Hawaii Youth Symphony Combo and the Jazz Band of The University of Hawaii at Manoa.