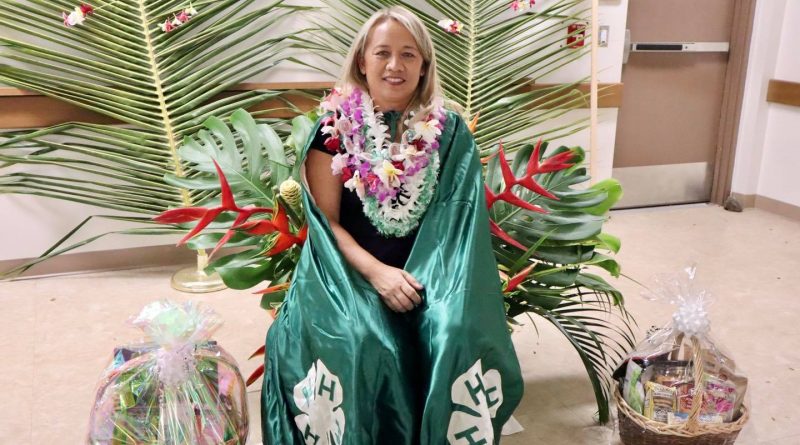 Ahaolelo State
July 15, 2021July 15, 2021 Admin
The ‘Aha‘ōlelo Ali‘i ceremony is a tradition that includes the recognition of honored guests and the “Gifts to the Ali‘i” presentation of locally significant gifts from each county 4-H program. Community members are chosen as Ali‘i based on the 4-H program values of leadership and community service.

Through her engagement with her immediate community on Molokai and extended community in Maui County and the state; her willingness to keep an open mind and listen; and her commitment to work with EVERYONE to make the State of Hawai’i a better place for all of its people, Ms. DeCoite demonstrates a strong alignment with the 4-H pledge to clearer thinking, greater loyalty, larger service, and better living for our clubs, our community, our country, and our world.

We appreciate Senator DeCoite’s passion for “doing the right thing for the people” and her support of the Hawaii State 4-H program. On behalf of the 4-H staff, leaders and volunteers, and its members, mahalo nui loa.

Senator Lynn DeCoite was born in Honolulu and has lived on Moloka’i since she was four years old. Ms. DeCoite graduated from Moloka’i High School and attended Moloka’i Community College. She and her husband own and operate L&R Farms where they raise the famous Moloka’i purple sweet potato.

In 2015 she was sworn in to represent the 13th District in the Hawaii State House of Representatives and was serving her 4th term this year when she was appointed on June 18th by Governor Ige to fill the vacant seat of Senator J. Kalani English. Her new district includes East Maui, Hana, Upcountry Maui, Molokai, Lanai, and Kahoolawe, which is a similar area to those she represented in the House.

Senator DeCoite is active with the National Foundation of Women Legislators and is the former Hawaii State Director and current Southwest Regional State Director. She was also honored as a “Women of Excellence” in 2019 for her tireless work in serving the communities she represents while also serving as an example of what women CAN do.

She has been very involved in her community including the Moloka’i Ag Festival, where she has shown continued support for the Molokai 4-H livestock members, attending the Maui Ag Festival to support the other 4-H clubs in Maui County, and supporting the State 4-H livestock show.