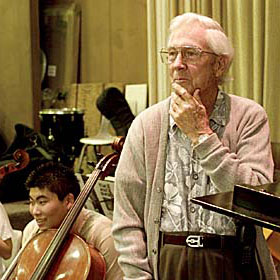 Born in British Columbia in 1924, composer Neil McKay became a U.S. citizen in 1963. He joined the faculty of the University of Hawai‘i at Mānoa Music Department in 1965 where he taught composition and related subjects until his retirement in 1987. He died December 8, 2016, at the age of 92.

Dr. McKay began his musical career as a jazz arranger-performer in 1940, was a clarinetist in the Canadian Navy Band (1944–46), and then arranger-conductor in Canadian radio until 1953. After acquiring a B.A. from the University of Western Ontario, he went to Rochester, New York, to earn M.A. and Ph.D. degrees in composition at the Eastman School of Music. His master’s thesis, Festival Concertino, won first prize in the Ottawa Symphony competition for Canadian composers and was premiered in Canada’s capitol city. His doctoral dissertation, Symphony No.1, was published by E. F. Kalmus and is widely performed in the U.S. and Canada. The slow movement, Larghetto, was awarded the Benjamin Award for quiet music and recorded by Howard Hanson and the Eastman-Rochester Orchestra (reissued by Polygram on the album, Music for Quiet Listening).

Dr. McKay’s compositions fall into three time periods. During the first, from 1953–68, his style was relatively conservative, as in the above mentioned symphonic pieces as well as in the String Quartet (premiered by the Fine Arts Quartet), Dance Overture (commissioned by the Duluth Symphony), and the opera Ring Around Harlequin.

A time of intense experimentation followed during the second period (1968–1988) involving musical concepts and/or instruments of Asia, Africa, and Polynesia. Examples are Evocations for concert band (published and recorded by Shawnee Press); Parables of Kyai Gandrung for Javanese gamelan and orchestra (written with Hardja Susilo and commissioned and premiered by the Honolulu Symphony); World(s) for solo koto (performed around the world by Ricardo Trimilios and by Keiko Nosaka in Carnegie Hall and recorded by her for Camerata Records of Tokyo); Soundprints for koto and clarinet (written for Henry Miyamura and first prize winner, American Chamber Music Composition Competition, sponsored by Roncorp in 1983); and Kubla Khan for soprano and chamber ensemble (published by Music Sales/G. Schirmer).

The third period, from 1988 to the end of his life, reflected McKay’s entire musical experience. Examples from this period are Symphony No.2; From a Jade Terrace for soprano and chamber ensemble; Kahalaopuna, Princess of Mānoa, an opera for youth; Connexions for clarinet duo; Ku‘u Pua Rose for mixed chorus; and Such Sweet Sorrow for orchestra.

During his teaching career at the University of Hawai‘i at Mānoa, Dr. McKay established courses in jazz improvisation and jazz arranging, and developed a contemporary music ensemble.

A fellow of the MacDowell Colony, he was also a member of the American Music Center, the Society of Composers, Inc., and the College Music Society. As an ASCAP member, McKay received numerous awards for publication and performance of his works.

On the less serious side, one of Dr, McKay’s pop tunes, I Fell in Love with Honolulu, has been recorded many times and he continues to arrange music for jazz ensembles here and in Canada.

In 1997 he was a composer-in-residence at the Piccolo Spoleto Festival in Charleston, South Carolina, where his experimental piece, Kaleidoscope, was performed by the Charleston Symphony. In the same year, the Hawai‘i State Foundation on Culture and the Arts awarded Dr. McKay an Individual Artist Fellowship “in recognition of artistic excellence, significant accomplishments in Music Composition, and commitment to the Arts in the State of Hawai‘i.”