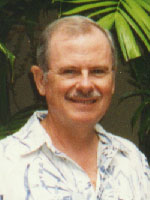 Dale E. Hall was a musicologist in the Music Department from 1974 to 1999 when he retired after 25 years of teaching. Following undergraduate degrees from Ohio Northern University and Oberlin College, he received a master’s degree in piano pedagogy and Ph.D. in musicology from Ohio State University. He published numerous articles in the area of Renaissance Italian Madrigal, his principal specialty, and in American music. During the academic year 1980-81, he did research in Poland on an I.R.E.X. fellowship. Toward the end of his teaching career, his research activities turned to music in Hawai`i and local music history, which resulted in the publication of The Honolulu Symphony: A Century of Music by Goodale Publishing Company in 2002. During his career, Dr. Hall’s contributions were substantial, in that he served on every major committee, participated meaningfully in every department initiative, and edited the FM-AM newsletter for many years.