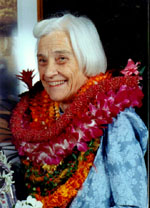 For over a half century Barbara B. Smith, Professor Emeritus of Music, has been a seminal figure at the University of Hawai’i and has been central to the cultural life of this state and to the validation of its multi-cultural heritage. Though principally an academic, her influence and accomplishments extend to community institutions such as the Honolulu Academy of Art, the Bishop Museum, and the Lili’uokalani Trust. Through her stewardship of and personal intervention with youth, she has assisted ethnic communities in developing a sense of their own identity and an understanding of their culture.

Barbara B. Smith grew up in the ranching and agricultural environment of southern California. She did her undergraduate work at Pomona College and completed her graduate education in music on the East Coast at the Eastman School of Music, where she began her teaching career. When Prof. Smith came to the University of Hawai’i in 1949, the Music Department was just being established. In her first years she taught piano performance and music theory. Among her early students were Herbert Ohta (Ohta-san) and Eddie Kamae, both recognized artists in Hawaiian music today. She was an active piano recitalist and often performed in the community.

Through her involvement with the community and her students, she became aware of the rich heritage of Hawaiian, Asian and Pacific musics and set about to understand them. She learned Iwakuni-style Bon Dance drumming, attracting attention as the first female and first Caucasian performer. She introduced ethnic music performance classes into the Music Department curriculum, initially Hawaiian chant and Japanese koto. She early recognized the value and potential of ethnomusicology at the University of Hawai’i and designed lecture courses and education workshops. She also established the master’s degree program in ethnomusicology in 1960.

Prof. Smith has been active in national and international organizations, such as the International Council for Traditional Music-UNESCO and the Music Educators National Conference. In 1986 her peers honored her with an invitation to present the Charles Seeger Memorial Lecture, the prestigious keynote address at the national meeting of the Society for Ethnomusicology. She has also contributed in quiet ways. She assisted in the organization of the University Micronesian Club and helped them produce a recording of their music. She organized a number of leadership seminars for artists and arts administrators at the East-West Center, participants of which are now in national arts positions in their own countries.

Although she retired from the University in 1982, Prof. Smith actively contributes to the University program and to the field of ethnomusicology. She continues field work and advocacy research throughout the Pacific.