Posted on: Monday, November 1, 2004
By James Gonser and Dan Nakaso; Advertiser Staff Writers
“Manoa residents shoveled mud and debris out of their homes yesterday, while University of Hawai’i officials canceled today’s classes and estimated damage in the millions after daybreak revealed the full extent of damage caused by the Halloween Eve flood of 2004. University of Hawai’i maintenance worker Jorge Ortiz assesses the damage the flood did to the Hamilton Library basement, which stores government documents. Some material even floated down to Dole Street…”

Posted on: Tuesday, November 2, 2004
By Mike Leidemann; Advertiser Staff Writer
“All through the University of Hawai’i’s Hamilton Library, and all over the Manoa campus yesterday, students, staff and faculty members scrambled to salvage precious and priceless documents swept away or damaged in the Halloween Eve flood. “It’s a scene of complete devastation,” interim UH President David McClain said. “It’s going to take a long time to recover.” Volunteers worked doggedly to salvage some of the 90,000 maps and tens of thousands of archival photographs that were drenched when a river of muddy water roared through the basement of Hamilton Library, tearing out walls, ripping down bookcases and ruining card catalogs and computer servers. The basement housed the university’s map collection, government documents room, collections services staff, and the School ofLibrary and Information Sciences. The flood also knocked out a computerroom that allows online searching of the library’s collections…” 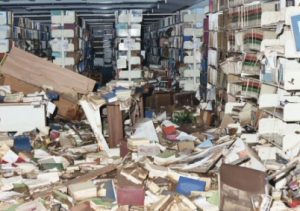