Thank you everyone who attended and to our panelists for their amazing insights! 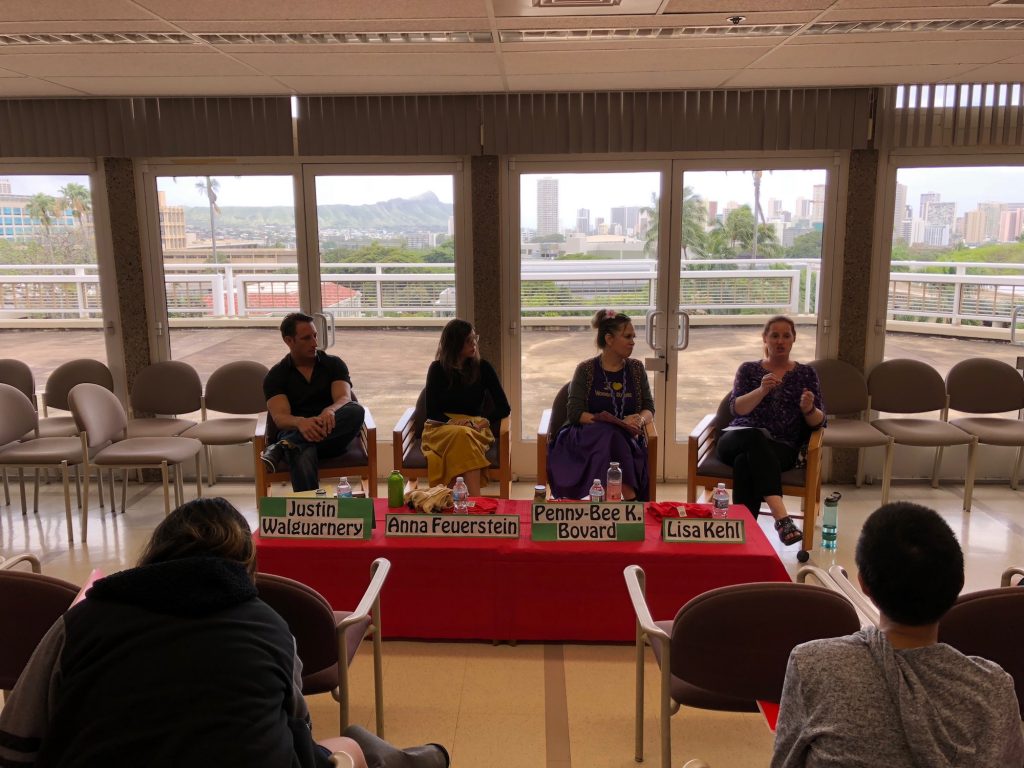 First, we heard from Lisa Kehl, serving UHM as the alcohol and drug educator with Health Services. Lisa shared her journey academic and career journey that has allowed her to adventure from New York to settling in Hawaii. During undergrad she changed majors a lot, initially wanting to major in dance, then interior design, and eventually finding psychology. In order to graduate relatively soon, summer school was a great resource for her to catch up. Following graduation there were a couple more moves along the west coast before Lisa arrived in Hawaii in 2001. At UHM she pursued her Master’s degree, beginning her career in social work thanks to the help of her mentors pointing out her natural desire to work in the field. Towards to end of the Master’s program, Lisa found that working in public health would be a great way to take part in larger change. She believes that being an active member of the community is so important, allowing her to find passion in her work every day.

Our second speaker was Penny-Bee. As a Hawaii Native and former UH athlete, Penny-Bee has roots here at UHM. During her time at UHM, she received her Bachelor’s degree in interdisciplinary studies with focus in gender laws and society. With a genuine passion for women’s studies and activism, Penny-Bee worked for Planned Parenthood while she lived in California, post-graduation. Though she spent 20 years on the west coast, Penny-Bee ultimately decided that Hawaii was home and came back to reunite with her family. After returning, she decided to go back to school to earn her Master’s degree in sociology. Penny-Bee highlights that it was her passions that drove her career and life path and by utilizing her intellect and intuition, she created opportunities for herself.

Up next Anna shared her story of taking on academic setbacks in stride. Growing up in Michigan, Anna was very invested in writing and wanted to pursue becoming an author, journalist, or teacher. Anna made the move to Seattle to enroll in the Art Institute of Seattle, where she spent some time and ultimately dropped out because she was not as interested as she initially thought. When she decided to re-enter school, Anna worked hard in community college and was set on transferring to University of Washington, however, she was rejected for missing her foreign language. Though this was a major set back Anna found French and ended up studying abroad in Paris because of this opportunity to diversify herself. An important tool in Anna’s academic and career journey was the time she spent putting thought into what she wanted to achieve. By consulting mentors and advisors she found herself on the right track to pursue her Doctorate in English. A misstep in academic can ultimately be a time to reevaluate the opportunities that lie ahead.

Lastly, Justin took us through his growth as a curious individual. As far back as he could remember, Justin wanted to be a Biologist and was fascinated with the nature around him in his hometown in Florida. During his years in high school, Justin dealt with social anxiety that he believes allowed him extreme mental focus and a lot of time to think by himself. Justin became a National Merit Scholar and received offers from many universities, but ultimately chose to stay close to home at the University of North Florida. Though Justin was able to break through his social anxiety during the early years of college, he fell behind as a student while balancing his social and academic life. Justin had to refocus himself in order to pass the Biology GRE and attend the University of Tennessee. A new campus presented new challenges that motivated Justin to attempt areas of academics he was not “excellent” in. His journey of becoming an open individual and pursuing academics taught him that having time to focus on your passion or current endeavors is of utmost importance. His advice to students at UHM, is to set goals even if they are imagined because a “dream job” may not exist yet; the pursuit to make a difference can create a new space for expertise.