The MFA in Hawaiian Theatre was established by Dr. Haili‘ōpua Baker in 2014 with its inaugural mainstage production being Lāʻieikawai (2015). Lāʻieikawai was also, in fact, the very first production of any sort of Hawaiian content to be featured on Kennedy’s mainstage over a half a century after its founding. The program includes courses on the history of theatre in Hawai‘i, the study and analysis of indigenous Hawaiian theatre, and training in both traditional and contemporary Hawaiian performance forms. Original hana keaka productions reflect and honor the language, traditions, history and values of Kānaka Maoli. A primary focus of the program is to grow practitioners of hana keaka; actors, playwrights, directors, designers, technicians, and patrons in order to grow the profession of hana keaka. Through the vision and intentions of Ka Hālau Hanakeaka, a Hawaiian-medium theatre troupe founded by Hailiʻōpua and Kaliko Baker, coupled with the curriculum and productions of the Hawaiian Theatre Program, our hui continues to serve the community and build capacity in the discipline of Hawaiian theatre. Ua ao Hawaiʻi, ke ʻōlino nei. 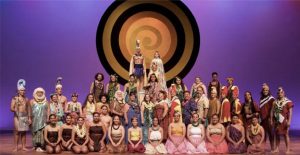 Playing the lead role of “Lāʻieikawai” in that inaugural production was Kauʻi Kaina, the Hawaiian Theatre Program’s very first candidate and graduate. Her thesis production, Nā Kau a Hiʻiaka (2017) was staged at BYU Hawaiʻi, just ma uka of Laniloa point where Hiʻiaka once battled the moʻo for whom that landmark was named. This production marked the beginning of a number of student works that the Hawaiian Theatre Program both supported and collaborated with in the coming years. Celebrating the future and past of Hana Keaka was the ʻAha Hana Keaka: Hawaiian Theatre Symposium (2016) which highlighted the works of Ka Hālau Hana Keaka and other haku keaka that gave life to traditional moʻolelo as a means to invigorate and stimulate the consciousness of our lāhui.
Later in October 2017, the Hawaiian Theatre Program co-sponsored The Art of the Chanter with hula masters Kealiʻi Reichel and Kaumakaiwa Kanakaʻole. And in 2018 the program ran a developmental series showcasing new works entitled Ka Wai Māpunapuna featuring orignial plays and screenplays. Todd Farley’s MFA in Theatre for Young Audiences thesis production was quite interesting in that it featured ʻōlelo Hawaiʻi narration and original mime choreography. Farley’s Moʻolelo o ke Koa (2019) was an ʻōlelo Hawaiʻi translation of Stravinsky’s L’Histoire du Soldat. Other budding Hawaiian works in the Theatre Department feature Kealiʻiikeola Simpson’s How The Press Toppled the Monarchy (2019) and Lot Lane (2019). 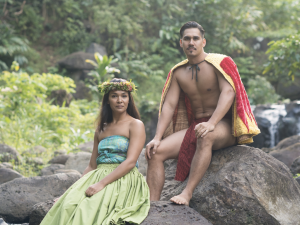 Punihei Lipe and Ioane Goodhue from Nā Kau a Hiʻiaka (2017) 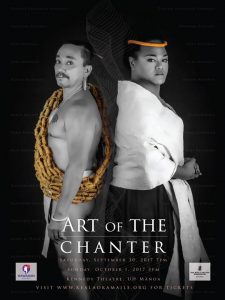 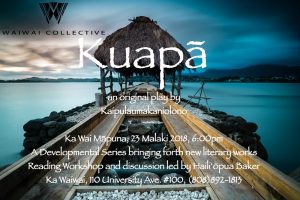 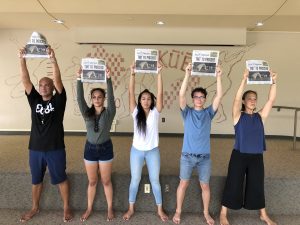 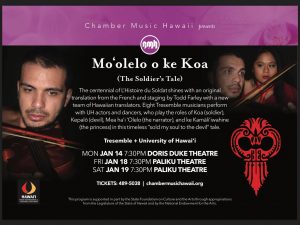 The year 2019 also featured the Hawaiian Theatre Program’s second production on the Kennedy mainstage, ʻAuʻa ʻia: Holding On which is an original weaving of history by Professor and playwright Tammy Hailiʻōpua Baker. The play follows four haumāna, ʻĀina, Kaʻihi, Ola and ʻAla on their research journey where they interact with various kūpuna from Hawaiʻi’s history, witnessing first-hand the most pivotal moments in our moʻolelo. This emotional journey implores them to interrogate who we are, where we came from and where we are going as a lāhui. The cast of ʻAuʻa ʻia: Holding On briefly remounted a couple of scenes to celebrate the bicentenial of the Battle of Kuamoʻo in which the ʻaikapu was dissolved in favor of ʻainoa under the governance of the christian god in Hawaiʻinuiākea’s Ka Hulina Au. 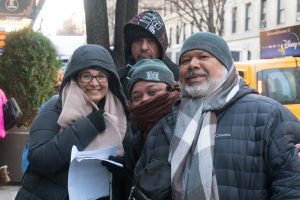 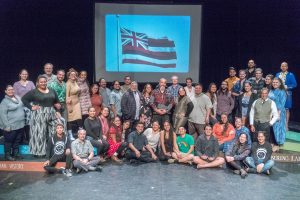 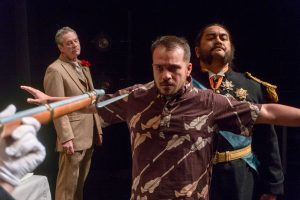 In January of 2020 ʻAuʻa ʻia: Holding On was invited to play at the Theatre for a New City in New York City as part of the innaugural Native Theatre Festival entitled Reflections of Native Voices. For almost all of the cast, it was their first time performing in the Mecca of theatre and for most of the predominantly local cast it was even their first time to the East Coast of the continent. The trip was incredibly exciting and surreal for many and an wonderful punctuation to the value and mana of hana keaka.

Next up for the Hawaiian Theatre Program is another installment of Ka Pō Leʻa o Halāliʻi in December of 2021. This evening of Hana Keaka will be showcasing the creative works developed by THEA 424, Hawaiian Acting Workshop. We are hoping to produce this event in person whilst simultaneously streaming to a Facebook and Youtube live audiences.

And swiftly approaching in the Spring is Ākea Kahikina’s Mainstage thesis production Hoʻoilina, which deals with the modern stratification of Hawaiian identity along with issues of inheritance. Hoʻoilina is set to premiere in April of 2022.

Apply Now to the MFA in Hawaiian Theatre!

Donate to the Hawaiian Theatre Program