Nutrition Transition Of The Pacific

Nutrition Transition of the Pacific: Traditional to Contemporary

Obesity is a global epidemic affecting both developed and developing countries (Wang & Lobstein, 2006; WHO, 2000). Despite the limited amount of data of obesity in Pacific Island populations, overweight and obesity prevalence rates have risen in recent decades alongside other non-communicable chronic diseases (e.g., type 2 diabetes) (Hodge, Dowse, Zimmet, & Collins, 1995; Pacific Islands Health Officers Association, 2010). Solutions to address and prevent obesity in the region include strategies to support healthy eating and active lifestyles through encouraging the consumption of traditional foods such as non-imported fruits, vegetables, and meats, as well as embracing culture and traditional physical activities like planting and fishing (Simmons et al., 2009; Swinburn et al., 2007). However, environmental and social changes in the Pacific Islands make discussions about what is considered a traditional food and what are acceptable practices in the diet sensitive and complex. It is important to understand changes in the food environment in the context of the respective cultures of the Pacific Islands, specifically within the United States Affiliated Pacific (USAP), before attempting any dietary recommendations as cultural relevancy increases the likelihood for a positive impact.

Nutrition transition refers to the shifts that have occurred in diet and in physical activity patterns. Modern societies have moved to diets high in saturated fats, sugar, and refined foods but low in fiber, and to lifestyles with lower activity levels (Popkin & Gordon-Larsen, 2004). These changes have been related to the shift from high prevalence patterns of infectious disease to non-communicable chronic disease (Popkin & Gordon-Larsen, 2004). Cultural identity, migration, social-cultural factors, food security, globalization and trade, as well as colonialism have been implicated as influence themes of nutrition transition (Bruss, Morris, & Dannison, 2003; Cassels, 2006; Kahn & Sexton, 1988; Linnekin, 1983; Torsch, 2002). Therefore, understanding the nutrition transition in the USAP provides valuable insight on the changes in tradition and diet of the Region.

Cultural identity involves how a person thinks and expresses oneself as part of a culture or group and may be shaped by processes of acculturation and enculturation. Acculturation refers to the changes in attitudes, behaviors, beliefs and values for an individual of one culture with a new culture (Williams & Berry, 1991), whereas enculturation refers to the process of socialization or re-socialization with the heritage culture norms (Cano et al., 2012; Herskovits, 1948). Levels of acculturation and enculturation for individuals vary but some integrate traditional heritage, while adopting some practices of the foreign culture. Some assimilate and adopt all of the practices and beliefs of the foreign culture but no longer identify with their traditional heritage. Conversely, others identify only with the traditional heritage regardless of the foreign practices or have no preference for either culture and are not concerned with any of the issues (Berry, 2003). As cultural revivalists search for an authentic heritage and rediscover culture, they also create it (Linnekin, 1983). Regardless, enculturation and/or acculturation influences nutrition transition as the integration of cultures and food throughout the generations leads to the evolvement of traditional into a contemporary sense.

The USAP is located in the areas of Micronesia and Polynesia. The region’s first settlers carried crops and animals to establish a subsistence foundation of farming and fishing (Kahn & Sexton, 1988). Early Pacific voyagers allowed for many ancient traditions to spread widely across the
Pacific returning home with many types of plants and animals to cultivate and consume (Kahn & Sexton, 1988). However, each of the indigenous
islands of the USAP has a long history of foreign influence and dependence. Countries like Spain, Germany, Japan, Britain and the United States (US) have occupied many of the islands making lasting impressions on the lifestyles and food system environments of the Pacific Islands; for example, foreign sailors, merchants, ambassadors, missionaries, and military brought shares of goods to the Pacific Islands from areas outside the Pacific. As a result, some crops, like guava, known to have originated in other areas of the world have become local and deemed traditional in Pacific Island food systems.

Even with these foreign influences, Pacific Island cultures still retain distinct social-cultural values. Food is viewed as a demonstration of love, generosity and care, while thinness is perceived as a result of illness or inadequate feeding (Bruss et al., 2003). The culture emphasizes the role of food in bringing families together but time has influenced drastic changes in diet composition and physical lifestyles of Pacific Islanders. This is becoming a common theme for Pacific Islanders who have a desire for cultural acceptance but also for balance to be healthy.

Part of the balance to be healthy includes being food secure. Natural disasters known to Pacific Islands, namely typhoons/hurricanes,
earthquakes, droughts, high tides and floods, have repeatedly damaged island infrastructures and agricultural systems, which influences the local
food supply. Depending on the magnitude, islands may be left flooded and barren. Several technologies protect plants and structures from the
damaging effects of global climate change, but fewer people are investing in the soils for growing plants for food (Spennemann, 1998). Instead, people have resulted to the non-perishable goods of rice, canned meat, instant meals, and other imported goods as (Gittelsohn, Haberle, Vastine, Dyckman, & Palafox, 2003) they are not only convenient, but do not spoil in the event of a disaster, alleviating the fears of famine.

Ironically, some foods that are naturally available to Pacific Islanders, like fish, return back to the islands for sale as canned foods (Nero, Burton, Jonas, & Taulung, 2000). The lack of sufficient infrastructure to be globally competitive forces many Pacific Island nations to sell their fishing rights to foreign nations (Cassels, 2006). Some nations sell these resources to merchants for global trade, so that Pacific Islanders only receive a fraction of the their worth (Cassels, 2006). Despite the direct resource to fresh fish, people have become dependent on foreign nations for economic development and also imported food. Striving for a successful cash economy has become mixed with the belief that imported foods are superior to local foods. This increased reliance of imported foods rather than on traditional foods partially characterizes the dietary globalization and nutrition transition occurring in the region (Evans, Sinclair, Fusimalohi, & Liava’a, 2001).

To further elucidate these concepts, the following is an example of the Chamorro nutrition transition on Guam. The pre-colonial diet of ancient
Chamorros was predominantly plant-based food, supplemented with animal foods comprised mostly of fish, crustaceans, fruit bat and birds (Cassels,
2006). Subsistence living, such as farming, fishing, hunting, roof thatching, woodcutting, creating pottery, and preparing food, involved physical
activities for men, women, and children alike (Marsh, 2009). The arrival of Spanish colonizers brought the introduction of four-legged animals,
mainly deer and pigs (Bevacqua, 2009). Then the Americans started training the first women to work jobs away from traditional household roles and
responsibilities (Cruz, 2009). Meanwhile children started going to school, learning new languages, and adopting foods from visitors (Yamashita, 2009). The post-World War II era provided a gateway to both the Western diet and urbanization for many of the islands, to include regular screen time in households, sedentary jobs, and canned meats like Spam and corned beef. These canned and imported foods became valuable sources for food security when natural disasters, such as Super Typhoons Paka and Pongsona, swept through the island. Today, many Chamorros identify with Spam as part of the culture and diet, but are not consuming the variety of plant-based traditional foods from their indigenous ancestors.

The potential effects of nutrition transition on dietary lifestyles of indigenous peoples span a wide range. Traditional values and beliefs
related to food and physical activity may be lost in modernization so that methods of food preparation and storage, amongst many other traditions,
are not passed down to newer generations. There are also foods considered traditional today that may not have existed on the islands pre-colonization. However, the promotion of traditional foods and food related practices, whether they are indigenous or newly adopted, may be a positive reason for the revival and embrace of culture. The cultures of the region were known to have healthy diets, regular physical activity, and low prevalence rates of noncommunicable chronic disease. Continual efforts to empower cultures of the region will be beneficial to support positive change and health outcomes.

The diets of Pacific Islanders are continually changing. Knowledge and awareness of nutrition and the Pacific Island cultures, allows the possibility to balance the old with the new to achieve a healthy diet. The Pacific Food Guide aims to help make connections between Pacific traditional foods and nutrition. Tradition, no matter how authentic it is perceived, is ever changing and adaptable. Rather than being limited to any specific definition of what is traditional, there is an opportunity for cultures to grow and weave the diversity that prevails in the world today. 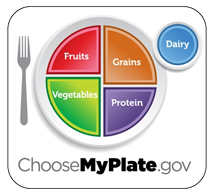 “MyPlate” is a visual cue for healthy eating and is the current food guidance in the United States (US). The different colors and sections indicate the different food groups that you should have in your diet on a daily basis in a meal. MyPlate is based off of the 2010 Dietary Guidelines for Americans, which offers advice on making healthy food choices that promote health and reduce disease for healthy individuals aged 2 years and up. It provides “the scientific and policy bases for all Federal nutrition programs, including research, education, nutrition assistance, labeling, and nutrition marketing”.

Grains: foods made from wheat, rice, cornmeal, barley or any other cereal grain

Protein: foods made from meat/poultry, seafood, beans and peas, eggs, nuts and seeds

We will use the culinary definition of F/V which refers to how the plant is prepared and eaten, as opposed to the botanical definition.

Dairy: fluid milk and foods made from milk 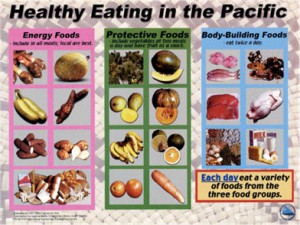 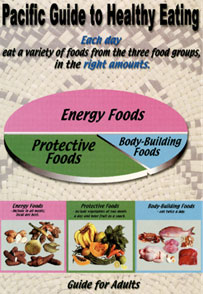 For every food item or family, there are several features of information presented that include:

5. Nutrition Facts label: based on availability of information in the following databases:

SPC pins label foods according to the SPC food groups for healthy eating in the Pacific.

Note: There may be a few foods that do not fall in either of the 3 food groups, which the SPC regards as not essential or needed in significant amounts to achieve healthy eating. The recommendations for these miscellaneous food items are to “Eat Less” of, but not necessarily to avoid completely as they may have cultural and traditional value. Such food items will have this pin.