Pacific Islanders consumed many of the same traditional foods. This included various species of taro, yam, breadfruit, cassava, sweet potato, banana, plantain, pandanus and arrowroot. While they may have eaten the same foods at one time or another, foods were ranked differently in certain societies. Food selection was based on preference for one crop over another. For each society of the Pacific, one of the starchy foods was ranked more highly than the others, usually being breadfruit, Colocasia (taro) or yams. The less favored starches were ranked as secondary foods, usually including bananas and certain types of taro. These foods were cultivated when the primary foods were unavailable (Pollock, 1992). 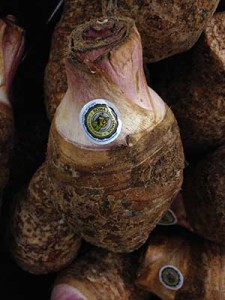 Many Pacific Island societies required that an accompanying dish be included in the traditional meal. An accompanying dish could include “flesh foods” such as meat or seafood. These foods would be served in conjunction with the starchy foods to create a meal. In Hawai‘i, taro or poi (pounded fermented taro) was commonly served with fish. The Yapese people complimented their gagan (starch) with fish (niq) and ripe coconuts (mareum). In Chuuk, a cooked vegetable staple was distinguished from a side dish. Without the side dish, a meal was not complete. The Pohnpeian people considered breadfruit or taro the “bulk” of their meal, and it was not complete without sali, a term used for a protein dish that could include meat, fowl or seafood. Palauans also accompanied their ongraol (starch) with some type of odoim (animal food). In this way, many societies across the Pacific considered their meal satisfying only if their preferred starch choice had an appropriate accompanying dish (Pollock, 1992).