Life was fundamentally structured around fishing, planting and harvesting crops. The magnitude to which Pacific Island societies utilized fishing or agricultural depended on location and a variety of environmental factors. Some Pacific Islands did more agricultural work, while others subsisted on fishing.

Many Pacific Island societies utilized certain phases of the year or “calendars” for specific steps of food production. For example, the Hawaiians divided their year into two seasons: Kau or summer (beginning in May), when it was dry and hot, and Ho‘oilo (beginning in October), when it was rainy and chilly. Among these varying seasons were different horticultural based occupations. After the ending of the heavy rains in February, gardens were planted with taro (kalo), sweet potato (‘uala), gourds (ipu), paper mulberry (wauke) and wood shrubs (olonā) on upper slopes, and yams (uhi) and arrowroot (pia) higher in the uplands. April was dedicated to tending the newly planted gardens, and by May, the plants were growing well, and certain varieties of sweet potato could be dug and eaten. By June, wild foods were plentiful in the uplands. In July, the gourds ripened in the lowlands and the upland farmers mulched their potato and taro patches. Early fall brought increasing rain showers with alternating clear weather. During this time, the main crop of sweet potatoes was harvested (Handy, 1991).

The Hawaiians also planted their crops based on the lunar cycle. One example is the planting of sweet potato or uala. The beginning of the dark phase of the waxing moon is most favored for planting. Hilo (first appearance of the moon in the west), Hoaka (second night moon), and the four Ku (third, fourth, fifth and sixth nights) moons are said to be good because “tubers of slips planted then will grow erect (ku) and sturdy” (Handy, 1991).

The Pohnpeian and Marshallese food systems both consisted primarily of agroforestry—multi-storied gardens of trees/shrubs grown among crops and animals. Nearly all production of crops was done by family units using local agroforestry technology. Traditional agroforestry generally did not exhaust the soils and provided ample amounts of food and other resources, such as timber, fiber and medicine (http://www.hawaii.edu/cpis/MI/Home.html). There were no distinct rainy seasons in Pohnpei, but there were distinct seasons for the harvest of their two main staples—breadfruit (mahi) and yam (kehp). Breadfruit was harvested from May to August, and was preserved in order to supplement the Pohnpeian diet in the off season, and to provide food security during natural disasters. Yams were harvested from September to March. (Englberger, Lorens, Levendusky, Pedrus, Albert, Hagilmai, Paul, Nelber, Moses, Shaeffer, Gallen, 2009). 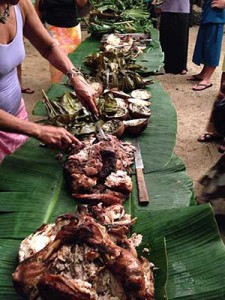 Throughout many Pacific Island societies, the production of food was ultimately a community event, where everyone had their rightful role. The Hawaiian’s division of labor in the kauhale (home, village) was very definitive. It was believed that men of the household needed to be protected from contamination of their food and work gear by women, who were periodically “unclean” due to their menstruation. Therefore, the production and preparation of food was dependent upon men. This principle led to restrictions on who could or could not do what, in connection with the simplest activities of daily living. Every aspect of taro economy and culture was man’s work. This included the making and tending of fields, terraces, ditches, planting, cultivating and harvesting taro, steaming taro in the earth oven, and peeling and pounding the steamed corms to make poi. Women were responsible for raising children, preparing pandanus leaves, plaiting mats and baskets, and performing all of the complex operations of tapa making. Women also gathered salt from evaporated salt water pools and stored it, and collected shellfish and edible seaweed (Handy, 1991).

Agricultural work was mainly done by men in Samoan culture as well. Women helped weed and harvest the garden, but the success of the garden was said to be dependent on the hard work of men. Women produced daily protein foods like fish and shellfish gleaned from near shore reefs. Men provided the high status protein foods from deep sea fishing and animal butchering. Food preparation was also separated by gender. Men went to the gardens to gather taro (talo), bananas (faʻi), breadfruit (ulu), and coconuts (niu), while women gathered firewood and collected breadfruit or banana leaves to cover the earth oven (umu). Men and boys scraped the breadfruit and taro and peeled the bananas. Most importantly, men grated the meat from ripe coconuts and squeezed the grating to make coconut cream. Building the umu and cooking the food was also the task of men (Bindon, 1988).

Besides the division of gender for food production, many Pacific Island societies enforced special food rules; forbidding or prescribing certain foods for particular occasions (e.g. lactating mother, before a man goes fishing). Rules existed for who should eat apart from others and what foods should be eaten. Gender was a very common distinction for who could eat what. Women’s food differed from men’s in that they were not allowed to eat certain foods or handle food when menstruating (Pollock, 1992).

For example, it was forbidden (kapu) for men and women to eat together in ancient Hawaiian society; each would have to eat in a separate house. Their food could not be cooked in the same earth oven (imu); therefore a man would have to cook both his and his wife’s food separately.

The Yapese used “eating classes” to clearly distinguish food between genders. The Yapese marked several aspects of food use: where it was cooked, who cooked it, and who could have access to it. Land was designated specifically for men, women and children according to their rank in the community. Each class had their own taro patch, garden, food-bearing trees and water supply. Fish was also divided. Men and women could not eat out of the same pot, nor could the same pot be used in preparing their separate food (Pollock, 1992). 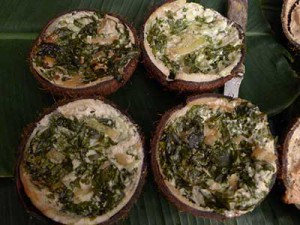 All of the starchy foods that were important to Pacific Island societies had to be cooked. This included taro, yams and breadfruit. This was necessary to rid them of toxic substances located under the skin. The accompanying dish could be either cooked or eaten raw. The predominant mode of cooking in the Pacific Islands was baking in an earth oven, as this was a major way of applying fire to food, and it could be used for most foods that needed to be cooked. Cooking in an earth oven either baked or steamed the food, depending on whether water was added. For example, Hawaiian’s preferred to steam their taro corms in the earth oven (imu). The Samoan earth oven (umu) was closely related to the Hawaiian earth oven. However, the Samoan earth oven was made above ground, rather than in a pit. The different modes of cooking altered the taste of foods, and Pacific Island societies varied in their preferences.