Geography: Located about 500 miles northeast of Yap (Yap Visitors Bureau, 2014), 1,500 miles south of Japan and 1,300 miles east of the Philipines, Guam is the southernmost of the Mariana Islands (Ridgell, 1995). The island is a combination of limestone in the north resembling a raised coral island and volcanic hills to the south (Encyclopaedia Britannica, 2014c) with mountains as high as 1,300 feet (Ridgell, 1995). The island has a land area of 210 square miles (Central Intelligence Agency, 2014b). There are numerous rivers and waterfalls in the southern half of the island and none in the north. The island is intermittently visited by destructive typhoons, with more destructive super typhoons occurring several times each century (Ridgell, 1995). 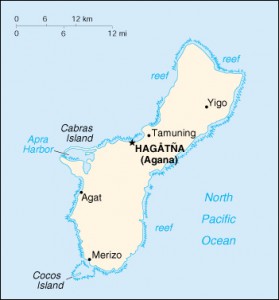 History: The indigenous people of the Mariana Islands, called Chamorros, arrived on Guam 3,000 to 4,000 years ago. Archaeological evidence shows that by 800 C.E. they had developed a complex society (Encyclopaedia Britannica, 2014c) which carved large stone pillars arranged in parallel rows as structural supports for buildings. Called latte stones, these pillars are prevalent in Guam and the Northern Mariana Islands. Found only in the Marianas, latte can reach up to 16 feet in height (Ridgell, 1995). The first contact between Europeans and any Pacific Island civilization came in 1521, when Ferdinand Magellan visited Guam (Ridgell, 1995). In 1565 Spain declared the Marianas Islands a colony, and Guam became a stop for Spanish galleons traveling between Mexico and the Philippines (Encyclopaedia Britannica, 2014h). In 1668 a Jesuit priest named San Vitores established a Catholic mission on Guam and began converting the Chamorros to Catholicism. Conflicts erupted between native Chamorros and the Spanish settlers, leading to the Spanish Chamorro Wars of 1680 to 1696 (Encyclopaedia Britannica, 2014h). The Spanish fought with the Chamorros, killing many and forcing other Chamorros from the Northern Mariana Islands to relocate to Guam (Ridgell, 1995). During this period the indigenous Chamorro population was also severely depleted as a result of diseases introduced by the Spanish (Encyclopaedia Britannica, 2014h). After the Spanish-American war in 1898 Spain ceded Guam to the United States. Until 1950 Guam’s governor was a naval officer appointed by the president of the United States. During World War II the Japanese Imperial Army occupied Guam from just after the attack on Pearl Harbor in December 1941 until it was recaptured by U.S. forces in August of 1944 (Encyclopaedia Britannica, 2014c). In 1950 Guam became a U.S. territory and its people became U.S. citizens (Ridgell, 1995). Beginning in the 1970s Guam adopted a more representative form of self-government, electing its first governor in 1970, sending a non-voting representative delegate to congress in 1972, and writing a territorial constitution in 1978. In 1982 a referendum vote resulted in the majority of Guamanians electing to adopt commonwealth status, but the provisions of this agreement were rejected by the U.S. government (Encyclopaedia Britannica, 2014c).

Demographics: Estimates of the Guamanian population prior to Spanish arrival are as high as 40,000. As a result of war with the Spanish and introduced diseases, the population dropped to around 5,000. Intermarriage between this Chamorro remnant, Filipinos brought to the island by the Spanish, and Spanish and Mexican soldiers gave rise to the Chamorro population seen today (Ridgell, 1995). Chamorros and other Micronesians make up approximately half the population, and Asians (especially Filipinos and Koreans) make up about a third. Foreign-born people account for 31% of Guam’s population. Of these, 13% are naturalized U.S. citizens and 18% are foreign nationals (U.S. Census Bureau, 2012). English and Chamorro are the official languages. English is the primary language for business and education, yet Chamorro is still spoken in many homes (Encyclopaedia Britannica, 2014c).

Political Affiliation: Guam is a U.S. Territory administered by the U.S. Department of Interior. Because it is an unincorporated territory, not all provisions of the U.S. Constitution apply there (Wasem, 2004). For example, residents of Guam cannot vote in U.S. presidential elections (Central Intelligence Agency, 2014b). It is, however, an organized territory, meaning that the U.S. Government has used an “organic act” to confer powers of government to the territory, setting up a territorial government and its relationship to the U.S (Wasem, 2004). With the passage of the Organic Act in 1950, Guamanians became U.S. citizens (Statham Jr, 1998). Guam has one non-voting delegate to the U.S. House of Representatives (Wasem, 2004).