Resilience in Native Hawaiians may lead to better health 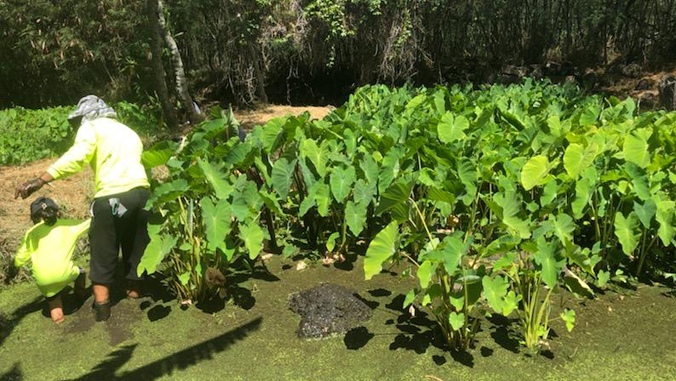 Ike kūpuna. For Native Hawaiians, relationships are an important part of resilience. This photo shows Scott Antonio (Mapuana Antonio’s makuakāne) and his moʻopuna connecting with ʻāina at a loʻi. Photo credit: Antonio ʻOhana.

Native Hawaiians who have higher levels of resilience may also have better health, according to new public health research from the University of Hawaiʻi at Mānoa.

Researchers led by Mapuana C.K. Antonio, an assistant professor in Native Hawaiian and indigenous health at the Office of Public Health Studies in the Myron B. Thompson School of Social Work, developed a new scale to measure resilience in Native Hawaiians. The scale was included in a survey of 124 Native Hawaiian adults living on Hawaiian Homestead Lands. The researchers compared the participants’ resilience scores with their self-reported health.

The findings are published online in the journal Behavioral Medicine.

“Resilience is complicated to measure,” Antonio said. For the new study, she and her co-authors incorporated scales that expanded on traditional measures of resilience, which look at a person’s ability to overcome adversity and persevere in times of difficulty. Traditional measures have generally looked only at internal traits, such self-reliance.

The researchers developed a new measure that takes into account the indigenous perspective of resilience, which places high value on relationships. “It is important to consider that for Native Hawaiians, health and resilience involves cultural identity and a sense of lōkahi, or harmony between the physical, spiritual, social and emotional self, and extends to include the outside world or environment,” said Antonio.

The researchers tested out their new scale and found it had good validity. They also found that the participants in their survey who scored higher on the resilience scale also reported higher levels of general health, mental health and physical functioning.

Native Hawaiians face much adversity that stems from colonization and historical trauma, including discrimination, health disparities and lower socioeconomic status compared with other racial and ethnic groups. “Our findings suggest that resilience may slightly mediate the effect that adversity has on health,” Antonio said.

The new scales can be used in future research on Native Hawaiian health that uses a strength-based approach, meaning research that focuses on the positive aspects of the community, rather than targeting deficits.

Antonio’s co-authors on the study included Earl S. Hishinuma, Claire Townsend Ing, Fumiaki Hamagami and Joseph Keaweʻaimoku Kaholokula of the John A. Burns School of Medicine; Adrienne Dillard, B. Puni Kekauoha and Cappy Solatorio of Kula no na Poʻe Hawaiʻi; Kevin Cassel of the University of HawaiʻiCancer Center; and Kathryn L. Braun, also of the Office of Public Health Studies.