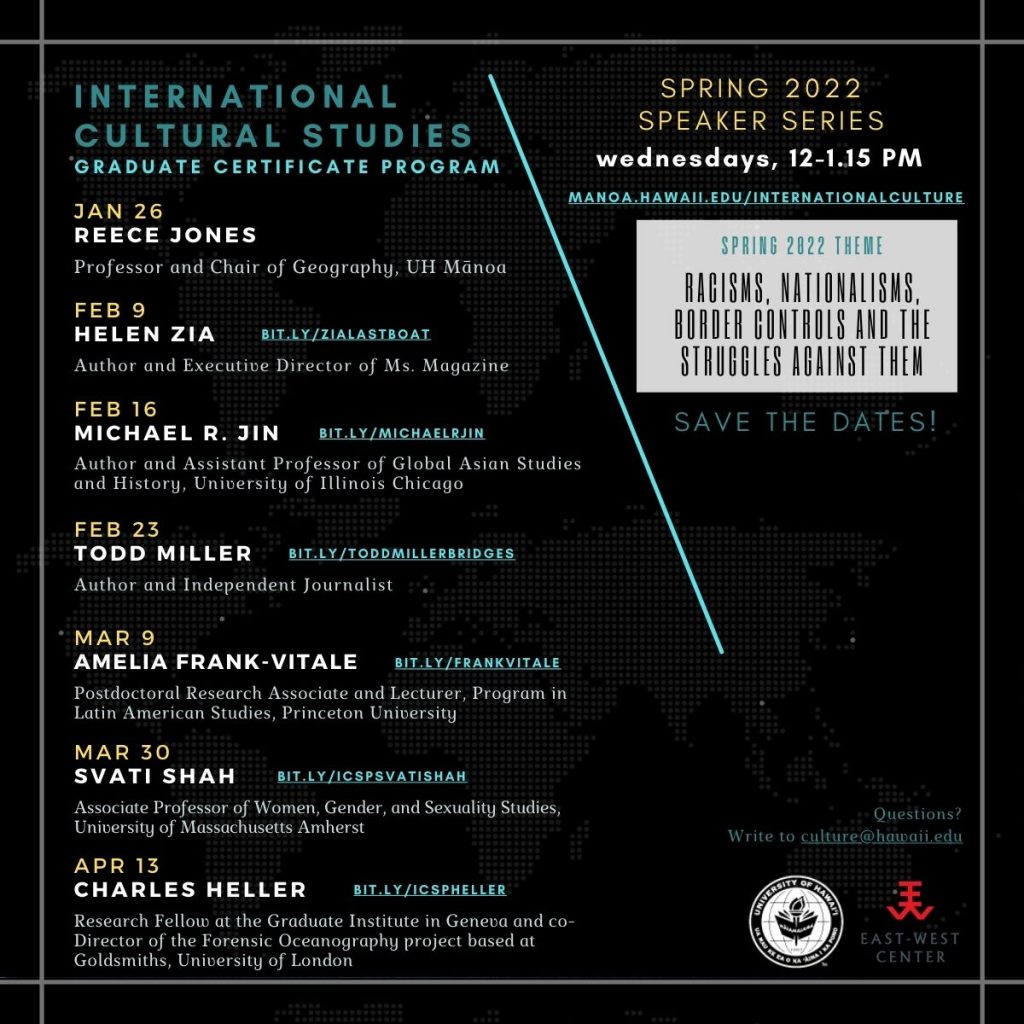 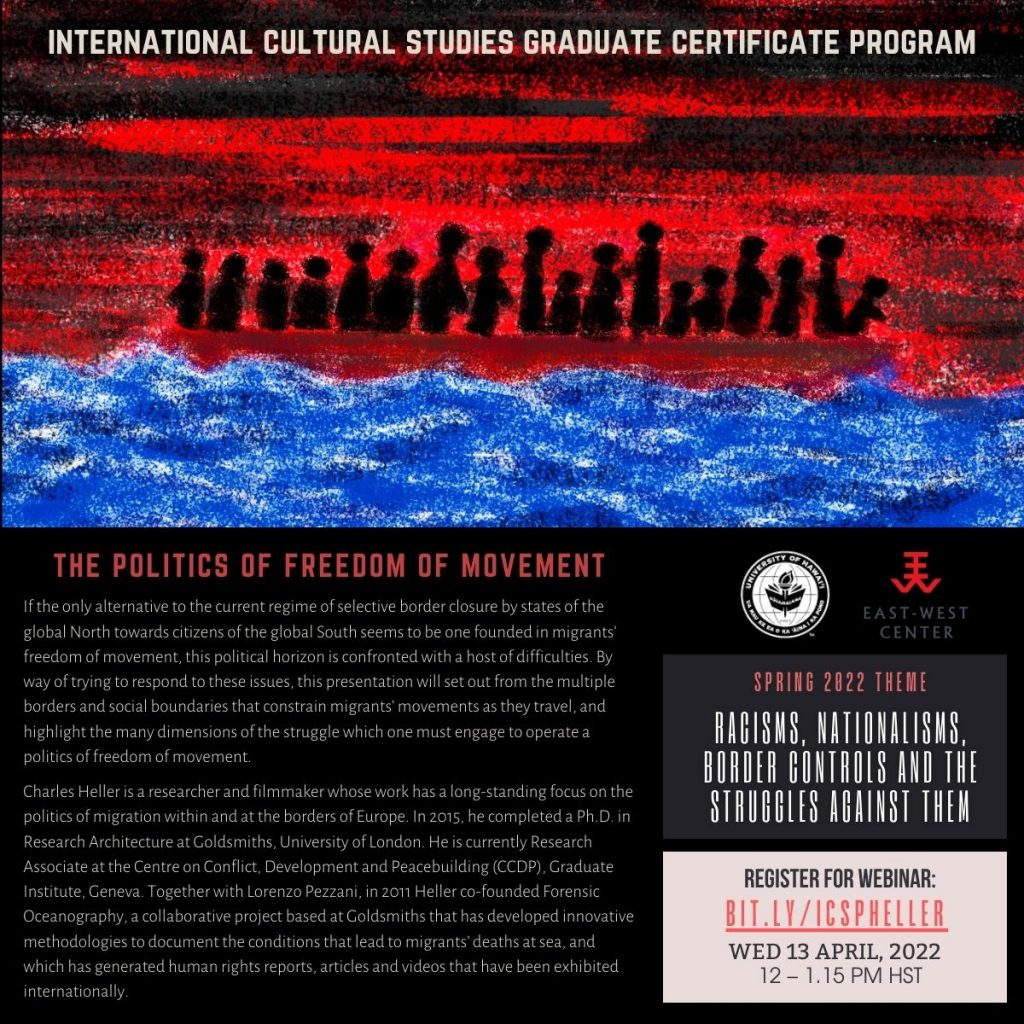 The Politics of Freedom of Movement | Charles Heller

If the only alternative to the current regime of selective border closure by states of the global North towards citizens of the global South seems to be one founded in migrants’ freedom of movement, this political horizon is confronted with a host of difficulties. By way of trying to respond to these issues, this presentation will set out from the multiple borders and social boundaries that constrain migrants’ movements as they travel, and highlight the many dimensions of the struggle which one must engage to operate a politics of freedom of movement.

Charles Heller is a researcher and filmmaker whose work has a long-standing focus on the politics of migration within and at the borders of Europe. In 2015, he completed a Ph.D. in Research Architecture at Goldsmiths, University of London. He is currently Research Associate at the Centre on Conflict, Development and Peacebuilding (CCDP), Graduate Institute, Geneva. Together with Lorenzo Pezzani, in 2011 Heller co-founded Forensic Oceanography, a collaborative project based at Goldsmiths that has developed innovative methodologies to document the conditions that lead to migrants’ deaths at sea, and which has generated human rights reports, articles and videos that have been exhibited internationally. 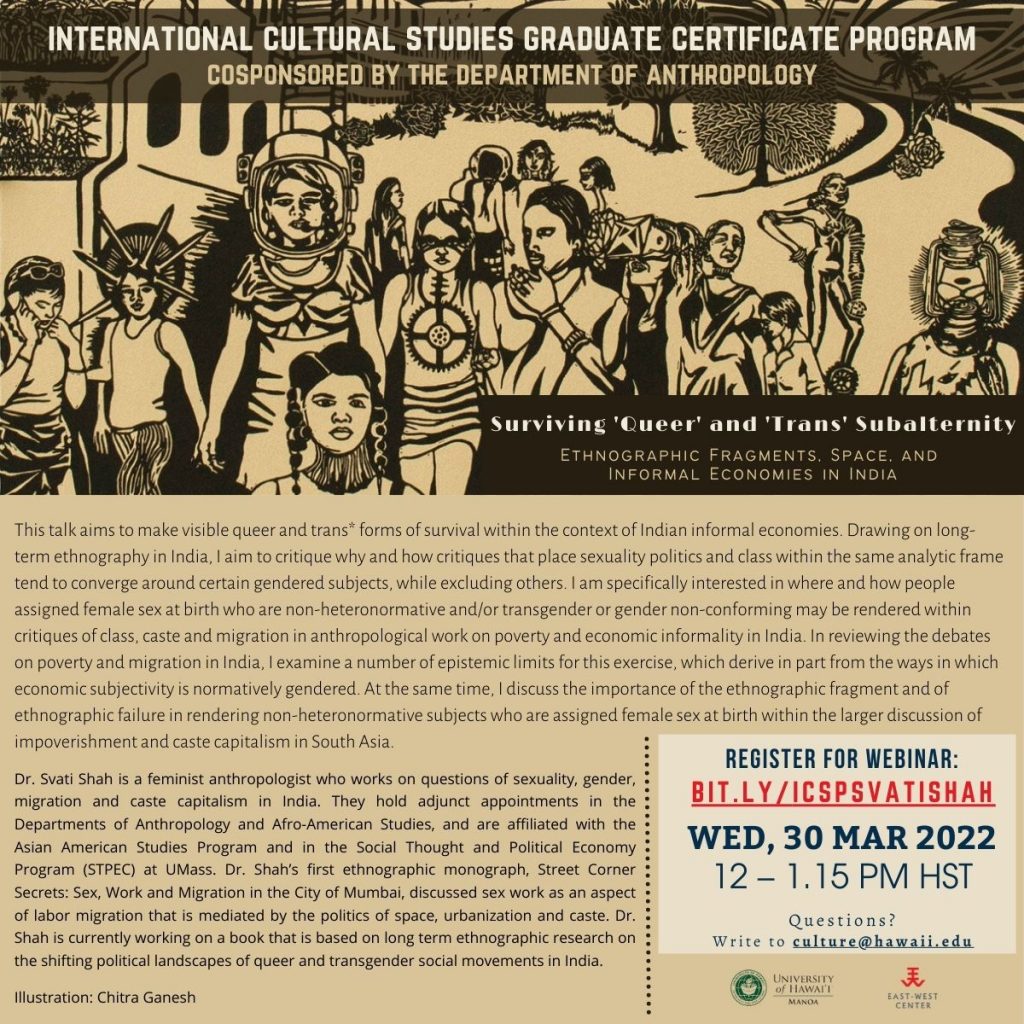 This talk aims to make visible queer and trans* forms of survival within the context of Indian informal economies. Drawing on long-term ethnography in India, I aim to critique why and how critiques that place sexuality politics and class within the same analytic frame tend to converge around certain gendered subjects, while excluding others. I am specifically interested in where and how people assigned female sex at birth who are non-heteronormative and/or transgender or gender non-conforming may be rendered within critiques of class, caste and migration in anthropological work on poverty and economic informality in India. In reviewing the debates on poverty and migration in India, I examine a number of epistemic limits for this exercise, which derive in part from the ways in which economic subjectivity is normatively gendered. At the same time, I discuss the importance of the ethnographic fragment and of ethnographic failure in rendering non-heteronormative subjects who are assigned female sex at birth within the larger discussion of impoverishment and caste capitalism in South Asia.

Dr. Svati Shah is a feminist anthropologist who works on questions of sexuality, gender, migration and caste capitalism in India. They hold adjunct appointments in the Departments of Anthropology and Afro-American Studies, and are affiliated with the Asian American Studies Program and in the Social Thought and Political Economy Program (STPEC) at UMass. Dr. Shah’s first ethnographic monograph, Street Corner Secrets: Sex, Work and Migration in the City of Mumbai, was published in 2014 by Duke University Press and by Orient Blackswan in India. It discussed sex work as an aspect of labor migration that is mediated by the politics of space, urbanization and caste. Drawing on a decade of ethnographic and archival research, the book showed that sex work is part of a range of economic strategies for survival among informal sector workers in Mumbai. Dr. Shah is currently working on a book that is based on long term ethnographic research on the shifting political landscapes of queer and transgender social movements in India. The book, Dissent in Queer Times: Sexuality Politics and India’s Second (Undeclared) Emergency, offers genealogy of LGBTQI+ spaces that emerged from the autonomous feminist groups and the civil liberties and democratic rights organizations that initially formed in response to the declared (first) Indian Emergency of 1975-77. 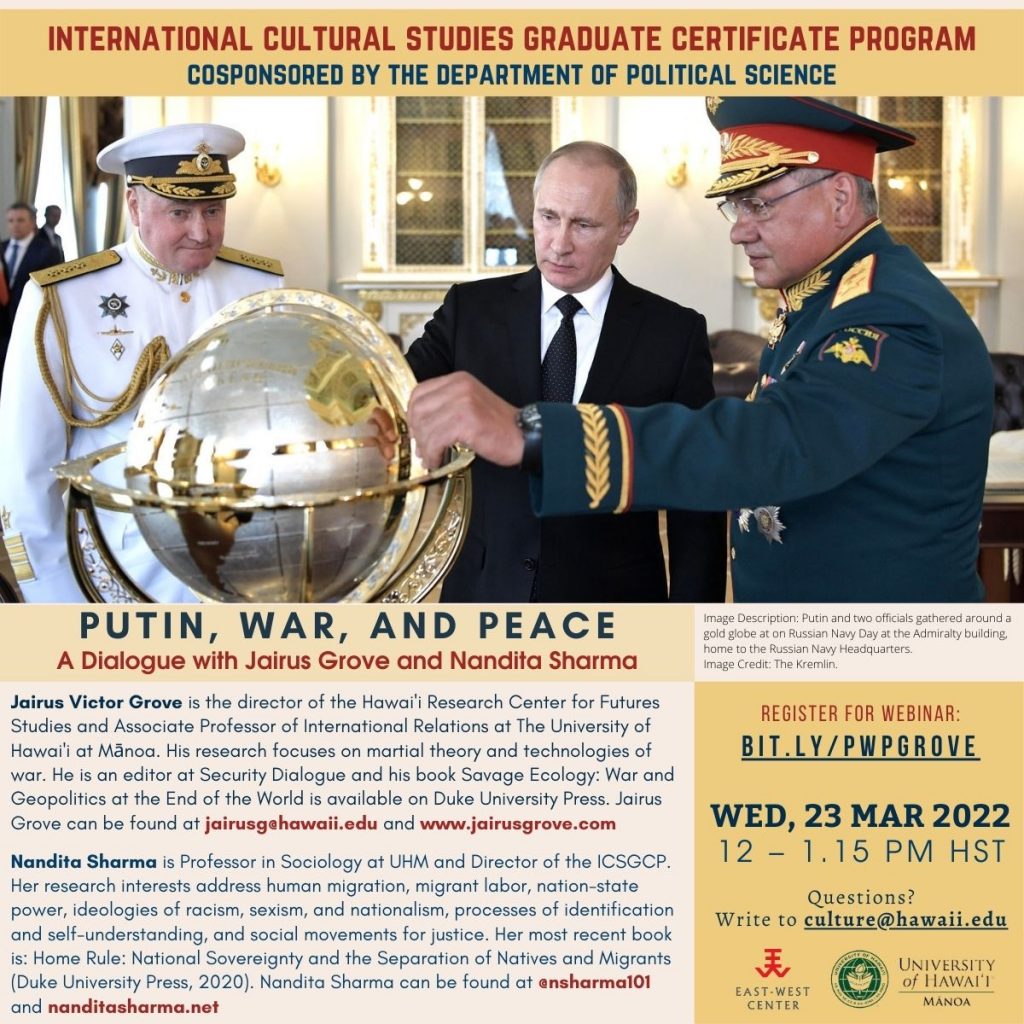 Dialogue with Jairus Grove and Nandita Sharma on “Putin, War, and Peace”.
Jairus Victor Grove is the director of the Hawai’i Research Center for Futures Studies and Associate Professor of International Relations at The University of Hawai’i at Mānoa. His research focuses on martial theory and technologies of war. He is an editor at Security Dialogue and his book Savage Ecology: War and Geopolitics at the End of the World is available on Duke University Press.
Nandita Sharma is Professor in Sociology at UHM and Director of the ICSGCP.  Her research interests address human migration, migrant labor, nation-state power, ideologies of racism, sexism, and nationalism, processes of identification and self-understanding, and social movements for justice. Her most recent book is: Home Rule: National Sovereignty and the Separation of Natives and Migrants (Duke University Press, 2020).
Date and Time: Wednesday, Mar 23, 2022. 12-1.15 p.m. 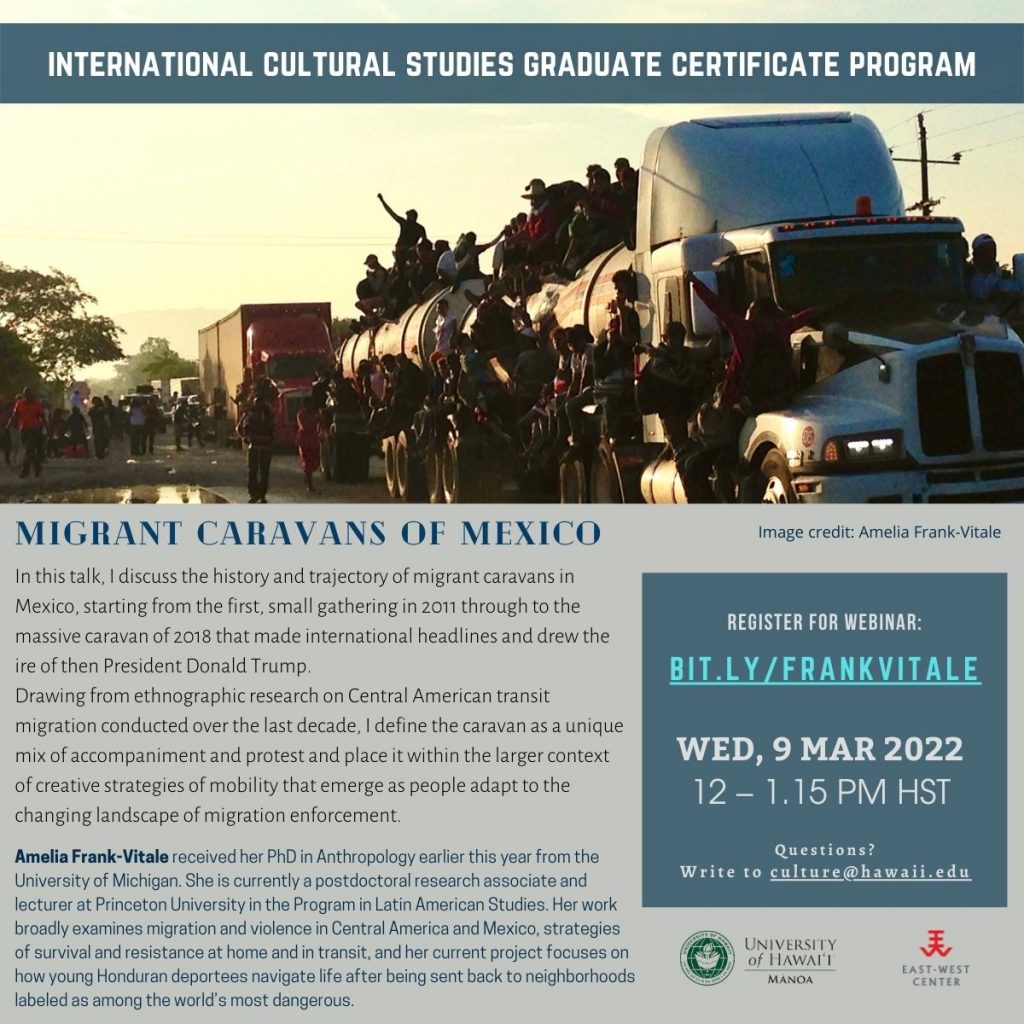 In this talk, I discuss the history and trajectory of migrant caravans in Mexico, starting from the first, small gathering in 2011 through to the massive caravan of 2018 that made international headlines and drew the ire of then President Donald Trump. Drawing from ethnographic research on Central American transit migration conducted over the last decade, I define the caravan as a unique mix of accompaniment and protest and place it within the larger context of creative strategies of mobility that emerge as people adapt to the changing landscape of migration enforcement.

Amelia Frank-Vitale received her PhD in Anthropology earlier this year from the University of Michigan. She is currently a postdoctoral research associate and lecturer at Princeton University in the Program in Latin American Studies. Her work broadly examines migration and violence in Central America and Mexico, strategies of survival and resistance at home and in transit, and her current project focuses on how young Honduran deportees navigate life after being sent back to neighborhoods labeled as among the world’s most dangerous. 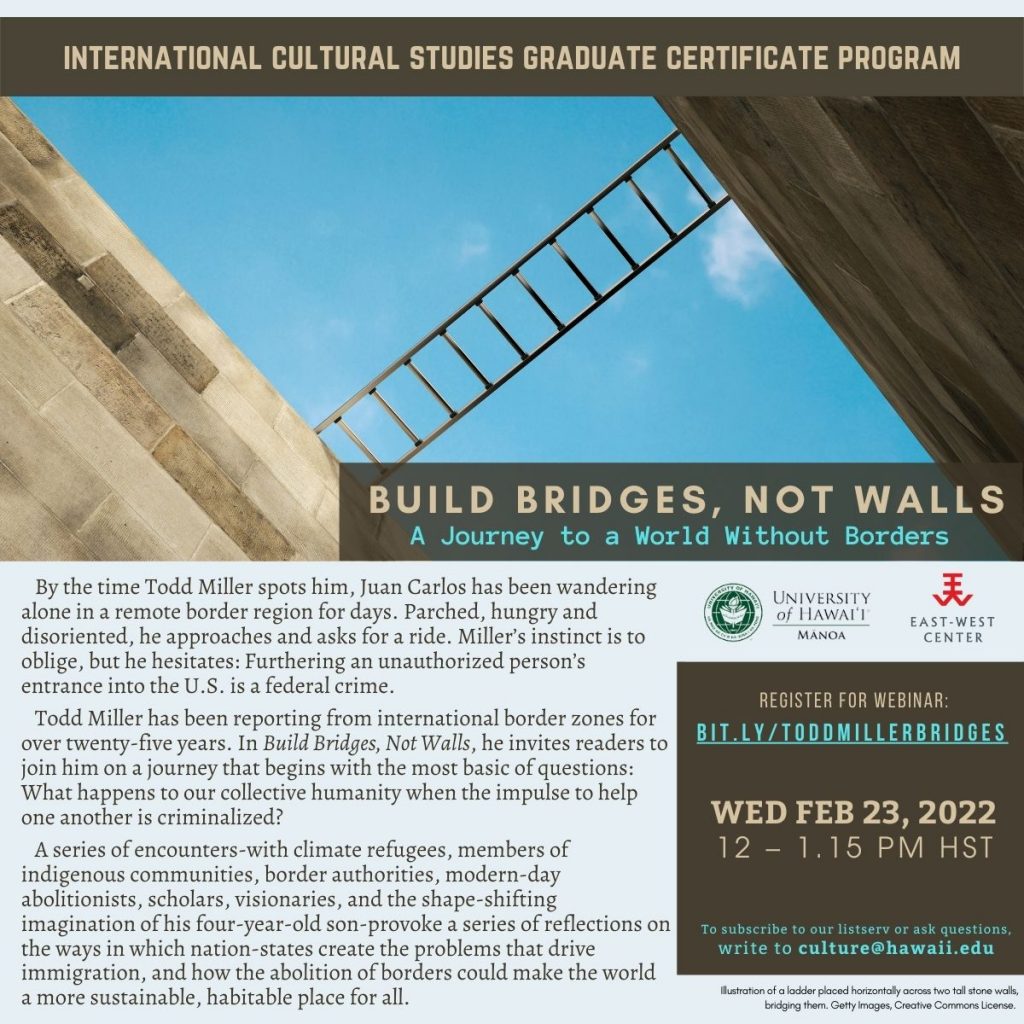 Build Bridges, Not Walls: A Journey to a World Without Borders | Todd Miller

By the time Todd Miller spots him, Juan Carlos has been wandering alone in a remote border region for days. Parched, hungry and disoriented, he approaches and asks for a ride. Miller’s instinct is to oblige, but he hesitates: Furthering an unauthorized person’s entrance into the U.S. is a federal crime.

Todd Miller has been reporting from international border zones for over twenty-five years. In Build Bridges, Not Walls, he invites readers to join him on a journey that begins with the most basic of questions: What happens to our collective humanity when the impulse to help one another is criminalized?

A series of encounters-with climate refugees, members of indigenous communities, border authorities, modern-day abolitionists, scholars, visionaries, and the shape-shifting imagination of his four-year-old son-provoke a series of reflections on the ways in which nation-states create the problems that drive immigration, and how the abolition of borders could make the world a more sustainable, habitable place for all. 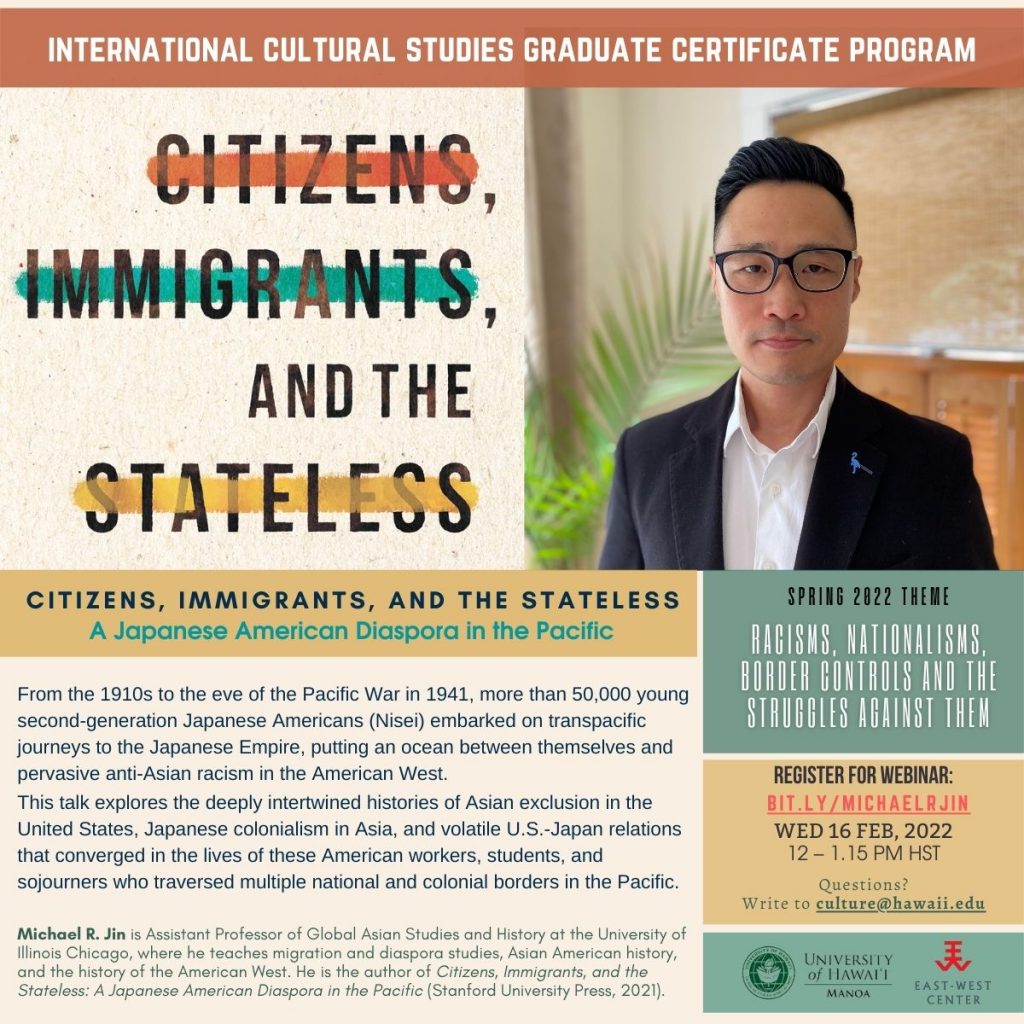 Michael R. Jin | Citizens, Immigrants, and the Stateless: A Japanese American Diaspora in the Pacific

From the 1910s to the eve of the Pacific War in 1941, more than 50,000 young second-generation Japanese Americans (Nisei) embarked on transpacific journeys to the Japanese Empire, putting an ocean between themselves and pervasive anti-Asian racism in the American West. This talk explores the deeply intertwined histories of Asian exclusion in the United States, Japanese colonialism in Asia, and volatile U.S.-Japan relations that converged in the lives of these American workers, students, and sojourners who traversed multiple national and colonial borders in the Pacific.

Michael R. Jin is Assistant Professor of Global Asian Studies and History at the University of Illinois Chicago, where he teaches migration and diaspora studies, Asian American history, and the history of the American West. He is the author of Citizens, Immigrants, and the Stateless: A Japanese American Diaspora in the Pacific (Stanford University Press, 2021). 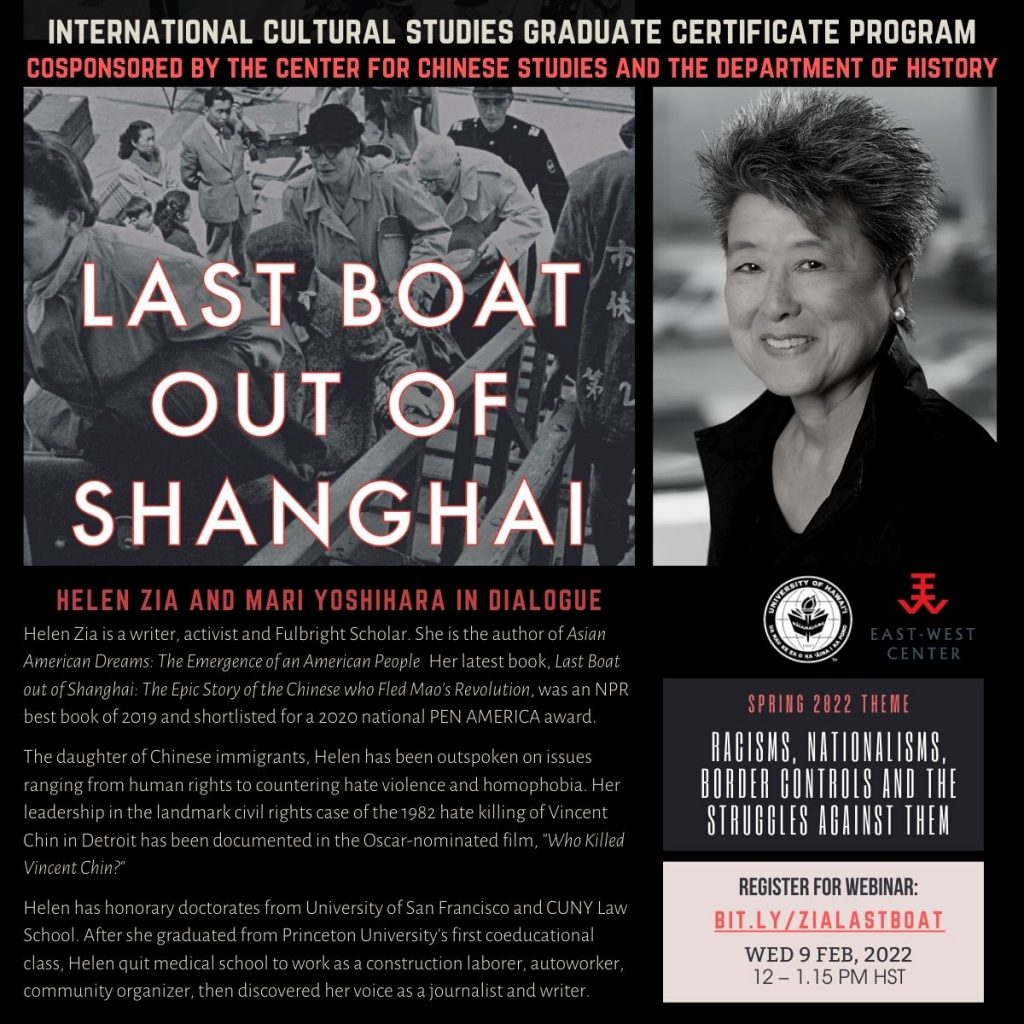 The Last Boat Out of Shanghai: Helen Zia and Mari Yoshihara in Dialogue.

Helen Zia is a writer, activist and Fulbright Scholar. She is the author of Asian American Dreams: The Emergence of an American People, about the contemporary civil rights struggles of Asian Americans; her latest book, Last Boat out of Shanghai: The Epic Story of the Chinese who Fled Mao’s Revolution, was an NPR best book of 2019 and shortlisted for a 2020 national PEN AMERICA award. An award-winning magazine journalist, she was the Executive Editor of Ms. Magazine.

The daughter of Chinese immigrants, Helen has been outspoken on issues ranging from human rights to countering hate violence and homophobia. Her leadership in the landmark civil rights case of the 1982 hate killing of Vincent Chin in Detroit has been documented in the Oscar-nominated film, “Who Killed Vincent Chin?”

Helen has honorary doctorates from University of San Francisco and CUNY Law School. After she graduated from Princeton University’s first coeducational class, Helen quit medical school to work as a construction laborer, autoworker, community organizer, then discovered her voice as a journalist and writer. 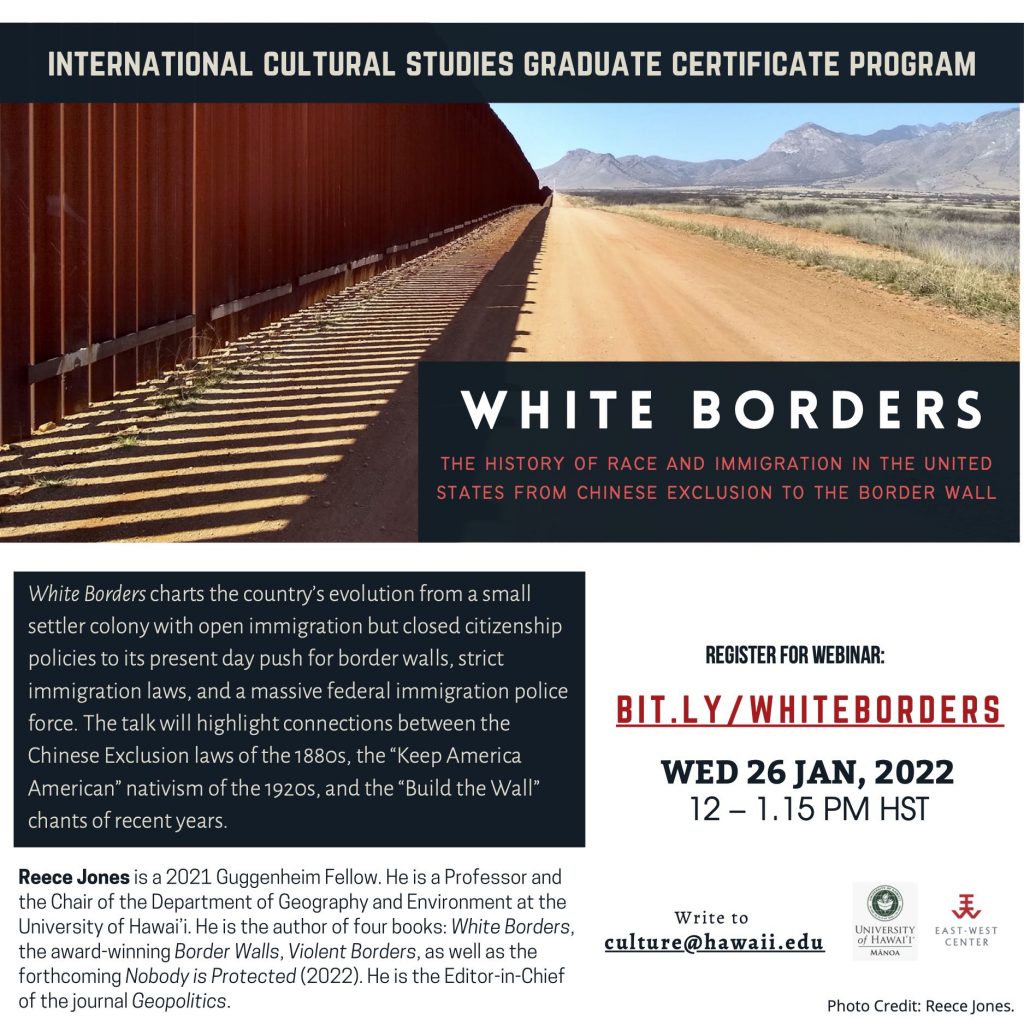 Reece Jones | White Borders: The History of Race and Immigration in the United States from Chinese Exclusion to the Border Wall.

White Borders charts the country’s evolution from a small settler colony with open immigration but closed citizenship policies to its present day push for border walls, strict immigration laws, and a massive federal immigration police force. The talk will highlight connections between the Chinese Exclusion laws of the 1880s, the “Keep America American” nativism of the 1920s, and the “Build the Wall” chants of recent years.

Reece Jones is a 2021 Guggenheim Fellow. He is a Professor and the Chair of the Department of Geography and Environment at the University of Hawai’i. He is the author of four books: White Borders, the award-winning Border Walls, Violent Borders, as well as the forthcoming Nobody is Protected (2022). He is the Editor-in-Chief of the journal Geopolitics.