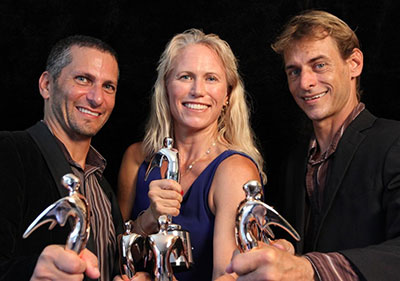 Posted at 11:43h in Past News, Science by admincrdg
Share

The Voice of the Sea television series, a signature project of the University of Hawaiʻi Sea Grant Center for Marine Science Education, recently received six 2014 Telly Awards, which are the premier regional television awards honoring excellence in programming.

Voice of the Sea promotes ongoing scientific and cultural work in the Pacific from recognized experts in a half-hour television show shown Sundays at 6 p.m. on KFVE (K5 The Home Team).

“We are very happy and proud to see that this high-quality, local show is getting acknowledged,” said KFVE general manager John Fink. “We continue to be impressed by the breadth of coverage this show provides week in and week out. KFVE is all about showcasing great local shows for our viewers, and Voice of the Sea certainly stands out.”

Voice of the Sea won a silver Telly, the most prestigious award, for cultural programming. The show also won five bronze Tellys for educational programming, documentary programming, use of graphics, editing and videography. The UH Sea Grant Center for Marine Science Education is proud to share this honor with its partners, the UH College of Education Curriculum Research and Development Group and the National Oceanic and Atmospheric Administration Pacific Services Center.

“We are so proud to have won these Telly Awards. To win a single award is fabulous, but to win six—we are blown away!” said Kanesa Seraphin, Voice of the Sea host and UH Sea Grant Center for Marine Science Education director. “The Telly Awards recognize us for programming that both entertains and educates. Voice of the Sea helps viewers better understand the world and showcases careers in STEM (science, technology, engineering and mathematics).”

Seven new episodes, featuring Palau and Guam, will air from October 19 through November 30. Go to the Voice of the Sea website to watch full episodes or learn more about the show.