History and Foundations of CRDG & ULS 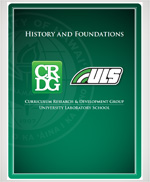 University of Hawai‘i Curriculum Research & Development Group (CRDG) established a partnership agreement with the Local School Board of the University Laboratory School, also known as the Education Laboratory. The school serves as an experimental site for researching and developing innovations in teaching, learning, and assessment in grades K-12.

ULS became a charter school and is renamed the Education Laboratory: A Hawai‘i New Century Public Charter School. CRDG administered the school as a laboratory for curriculum R & D.

CRDG merged with the College of Education. ULS applied for charter school status.

CRDG, along with other research units, reorganizes under the UH Office of the Senior Vice President for Research.

The Hawaii Curriculum Center is phased out and ULS comes under a new College of Education unit known as the Curriculum Research & Development Group (CRDG).

ULS becomes part of a new entity, the Hawaii Curriculum Center. This is a joint operation of the Hawai‘i Department of Education and the University of Hawai‘i to develop curriculum programs and materials for schools.

Teachers College becomes the College of Education, and Hawai‘i becomes the fiftieth state.

University High School Building 1 on the Metcalf Street side of Teachers College is completed.

Punahou School, displaced by the military occupying its campus, moves into Castle Memorial Hall and other buildings, but Teachers College continues to operate.

The school moves to a new 15-acre site (once a pig farm) adjoining the University of Hawai‘i at Mānoa. The University’s Department of Secondary Education becomes the School of Education.

Benjamin Wist becomes the principal of the school.

The teacher training department moves to Victoria and Young Streets and is renamed Honolulu Normal and Training School.