Commencing in 1977, the Kamakakūokalani Hawaiian Studies Program received permanent status in 1985 and, in 1987, was established as the Center for Hawaiian Studies in the School of Hawaiian, Asian, and Pacific Studies (SHAPS). Since 1997, the center has been housed in its own facilities on Dole Street. In 2007, Kamakakūokalani joined with Kawaihuelani Center for Hawaiian Language, Ka Papa Lo‘i o Kānewai and the Native Hawaiian Student Services Kauhale to form the newly incorporated Hawai‘inuiākea School of Hawaiian Knowledge.

Kamakakūokalani Center for Hawaiian Studies is named in honor of the late Gladys Kamakakūokalani ʻAinoa Brandt.  Mrs. Brandt was one of Hawai’i’s most distinguished and revered kūpuna.  An educator and administrator, she was the first female principal in Hawai’i’s public schools and Kaua’i’s school district superintendent, principal of Kamehameha School for Girls, director of the Schools’ secondary divisions, and as a member of the University of Hawai’i Board of Regents from 1983 to 1989, its chair for four years. As a regent, she was instrumental in the founding of the Center for Hawaiian Studies and credited with being the person most responsible for the construction of the Center’s facility.

The literal meaning of kamakakūokalani is the “upright eye of heaven” that is honored by a water sculpture at the center or piko, of the building.  The circular piko is an area that reaches up to the heavens.  It signifies holding to lofty ideals and seeking the highest knowledge.

Mrs. Brandt believed that through education the Hawaiian people will be healed and share the glories of their culture with the world.  Mrs. Brandt’s mana’o still inspires and guides Kamakakūokalani. 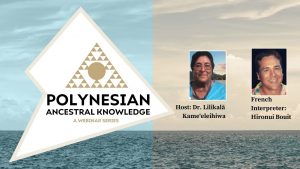 Aunty Gladys Kamakakuokalani Brandt left a legacy to the Kamakakuokalani Center for Hawaiian Studies, that proudly carries her name, to establish the Brandt Chair for Comparative Polynesian Studies. We are doing a weekly Webinar series on Polynesian Ancestral Knowledge.We are…
Oct
30
Fri
2020
9:00 am Lei Ānuenue @ ONLINE- http://kanaeokana.net/kakahiaka
Lei Ānuenue @ ONLINE- http://kanaeokana.net/kakahiaka
Oct 30 @ 9:00 am – 10:00 am 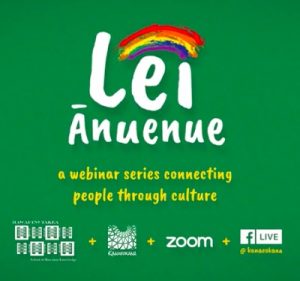 Hawaiʻinuiākea continues to partner with Kanaeokana to bring you a webinar series that connects people through culture.  For a more detailed schedule of events visit our online scheduler at http://kanaeokana.net/schedule.  We go LIVE on Zoom at 9am every Friday morning…
View Calendar
Add
Apply Today
Back To Top