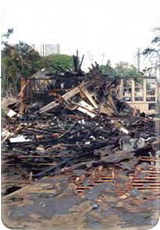 The University of Hawai‘i, and in particular the College of Education, found itself in a year of interims in 2007: the Mānoa campus saw interims filling chancellor and vice-chancellor positions, while the COE was headed by an interim dean in the person of CRDG Director Don Young. In CRDG, the associate director became the acting director, and the University Laboratory School continued with an interim principal.

The loss of facilities from the fire in June 2006, which resulted in the relocation of classrooms and offices to temporary and shared spaces in 2007, added to the sense of transition. Finally, several recent retirements had opened positions for new, young staff with an abundance of energy and new ideas, but little grounding in the theories that defined CRDG. This, in turn, gave rise to a return to our roots through a series of discussions that challenged and invigorated the entire unit.

Given the definition of interim as “temporary” or “an interval in which continuity is suspended,” the expectations for CRDG in 2007 might reasonably have been for chaos, or at best, to simply remain in a holding pattern. Ultimately, however, continuity was not suspended, and the label temporary was not relevant. CRDG weathered these transitions, continuing its research, forging new partnerships and relationships, building curriculum, and taking leadership roles in educational initiatives. As the year ended, positions were filled. Portable buildings were completed and furnished. Interims were welcomed back to their previous positions with renewed spirit and perspective and new resolve for the future. The CRDG community was strengthened in this year of transition by the collegiality and professional growth of its members and by adhering to the foundations on which it was built.