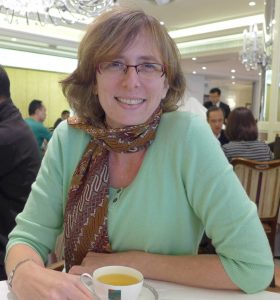 Cathryn Hope Clayton is Associate Professor and Chair of the Asian Studies Program ​at the University of Hawai’i at Mānoa,

Professor Clayton’s work explores the question of Chineseness: how and why it becomes a compelling form of collective subjectivity (be it nationalist, diasporic, regional, civilizational) at different points in time and space. Her research and teaching areas thus encompass sovereignty and imperialism, nationalisms and transnationalisms, “blood ties,” and collective memory, especially as they have played out in 20th-century China and Chinese communities abroad. Her first book examined how conceptions and practices of sovereignty shaped the categories through which Chineseness was imagined in Macau (a southern Chinese city that had been a Portuguese colony since the mid-sixteenth century), as that city prepared to be transferred from Portuguese to Chinese administration in 1999. She has also published on the Cultural Revolution in Macau, the social identification of hunxue’er or “mestizos” in Macau and greater China. Professor Clayton also maintains an active vocation as a Chinese-English translator.