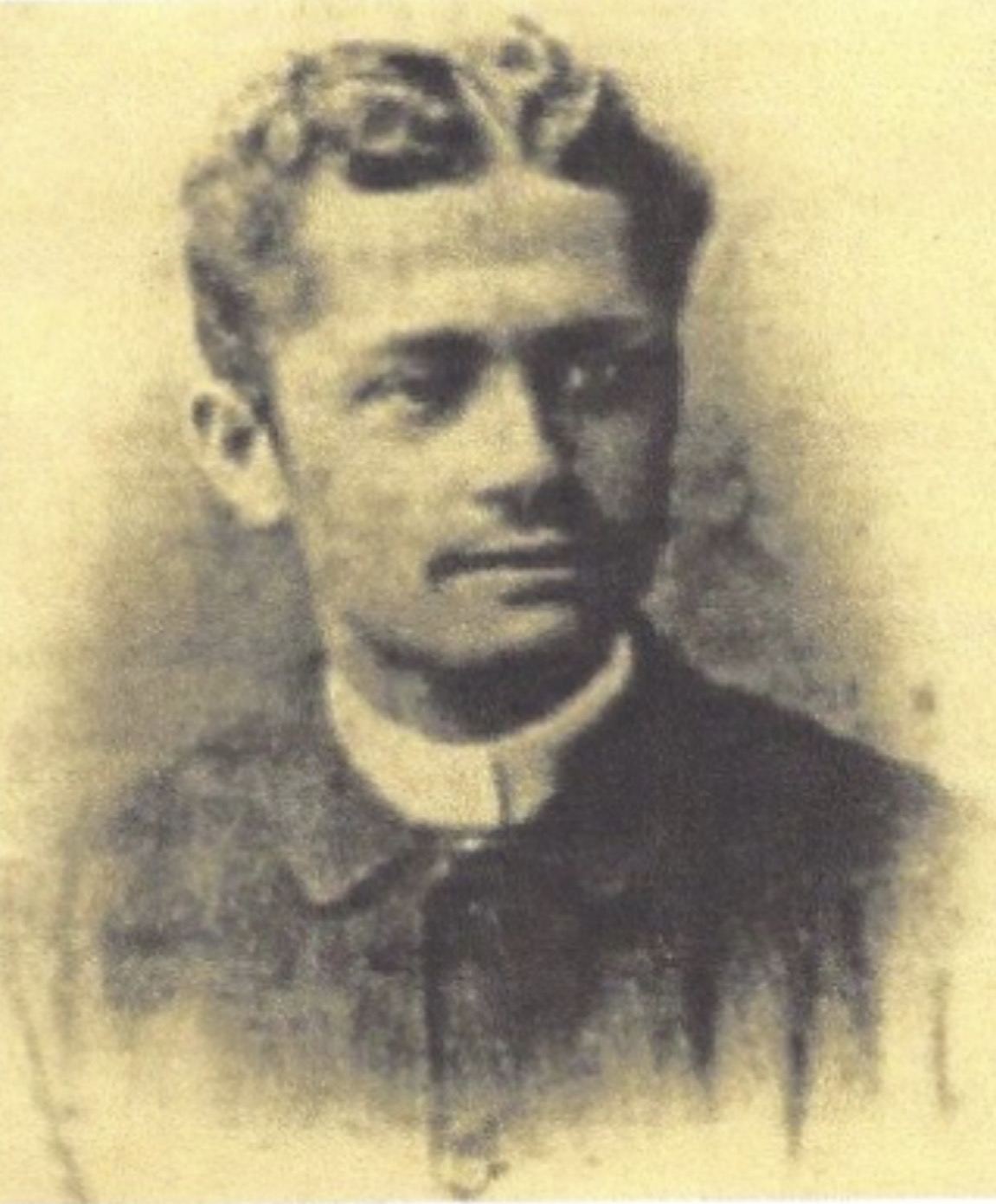 On this lāpule, we start our day with a huakaʻi to Hastings to visit Matthew Makalua’s grave. It was about a 4 and a half hour ride from the University of Exeter. We traveled on a motorcoach and as we looked out the windows, there were lots of open fields, cows, and even Stonehenge. When we arrived in Hastings, we met up with Marilyn, Anne and Sarah at the White Collar Hotel. Marilyn and Anne met the Hawaiian Youths Abroad group last year, and are volunteers at the cemetery where Makalua is buried. Sarah is a doctoral student doing research on Lady Brassey and also works at the Hastings Museum. The mayor of Hastings was also supposed to meet up with us, as he did with our group last year, but he last minute could not make it.

After a quick lunch at the White Rock Hotel, they took us to the pier where Kalākaua arrived during his diplomatic world tour in 1881. Kalākaua got off that very pier we were on and took a carriage around the town, visiting the Hastings Library (The Brassey’s property at the time). We then walked up to the Hastings Museum. The museum was filled with the Brassey ʻohana’s collection of things they acquired on their worldwide voyages, one of which is an ahuʻula said to have given to Lady Brassey from Kalākaua when they came to Hawaiʻi.

After the Museum, we took a taxi to Hastings Cemetery. This is where Dr. Matthew Manuia Makalua, one of the 18 Hawaiian Scholars sent by King Kalakaua to be educated abroad is buried. He studied Medicine in England with 2 others, James Aio Kamauoha and Abraham Piʻianaiʻa. Matthew Makalua is often considered the first western trained Native Hawaiian medical doctor.

Matthew Puakahakoililanimanuia Makalua, son of Matthew Makalua and Leiaholia, was born in Lahaina, Maui on 11 April 1867. His father, Matthew Makalua (1841-1902) was the Deputy Sheriff of Lahaina, who later became a Judge. He is buried in Puʻupiha Cemetery, Lahaina Maui.

His mother, Leiaholia (1841-1906) is buried in Pauoa Hawaiian Cemetery, Oʻahu. Makalua also had a sister, Kapahukapuopakaalana, who died in 1885. Matthew Makalua attended ʻIolani School, one of the most prestigious schools during the Hawaiian Kingdom. He was only 15 years old when he left for England. 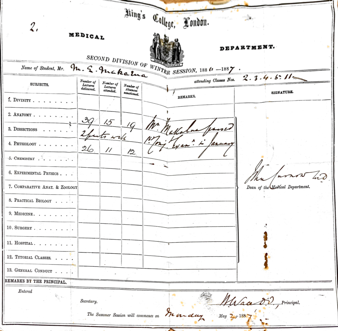 Upon arriving in England, Makalua was first enrolled at St. Chad’s College, a preparatory school in Denstone. He attended St. Chad’s for about a year, where he took most of his prerequisite courses. He took classes such as French Grammar, Chemistry, Algebra, German, Latin, History, Divinity and Music. He was an exceptional student who adjusted well to England.

In 1884, Makalua attended King’s College School of Medicine. He managed to excel in all of his classes even though at least one of his report cards report that he only went to half of his lectures. In the 1886-1887 term, out of the 39 anatomy classes Makalua had, he only attended 15 of them. The same for his physiology class: out of the 26 classes, he only attended 11 of them. However, he still managed to pass his classes with “good satisfactory.”

He won numerous certificates and prizes while attending King’s College. In 1888, he won the prize for Hygiene and Surgical Sanitation, was awarded the First Certificate of Honor for Medical Jurisprudence and was a finalist for the Pathology and Morbid Anatomy award the next year. He either finished first or second in the class for all the major examinations.

Although he was doing well academically, he faced some hardships. In 1886, Joseph Kamauoha, one of the other Hawaiians that studied in England with him passed away. He writes home:

To the editor of the P.C Advertiser- Sir: It is with great grief that I find myself compelled to write to you in anything but a happy strain. Yesterday afternoon at Torquay, Devonshire, J.A. Kamauoha breathed his last. Sadness and melancholy shadowed the termination of a life in its full bloom. Kamauoha was a great favorite with all who enjoyed his friendship and acquaintance, and his loss will be greatly felt by them all. His career at King’s College was extremely hopeful, and he only needed another term of six months to finish his course. I know your kindness will not grudge me space in your invaluable journal for the inversion of this unhappy letter, and I make no doubt that my friend’s memory will find a warm corner in many a Hawaiian’s heart.

After the death of his friend, Makalua finds himself struggling in school, but is progressing slowly. He writes a letter home to the king regarding the passing of his examination and asking for more appropriations.

“I find my studies extremely difficult and I progress but slowly. However I have passed one out of the few examinations necessary for my diploma. Last term I was second for the Histological Prize at King’s College. I was very much disappointed as the week before I was first in the class examination.
Sire, I venture again to offer my humble, through earnest assurances of loyalty to Your Majesty, the Queen, and all the Royal Family. “E ola ka Lani Moi”
Most humble loyal subject
Matthew E.M Makalua

In 1887, the Bayonet Constitution happens in Hawaiʻi and the Hawaiian government sends a letter telling Makalua that he needs to return to Hawaiʻi to serve his country, but also because all scholars were ordered to return after the Bayonet Constitution, as the new Bayonet cabinet attempts to defund the program. He sends a letter back to Kalākaua saying,

Nov. 19, 1887
Your Excellency,
Mr. Armstrong has forwarded to me my orders for recall. Pardon me if I take the liberty, before too late, of addressing you, with the hope that you will reconsider your decision. The circumstances under which the certificate of ill health was obtained have changed. I am now in good health and am anxious to push on with my work. My studies are progressing! I having obtained a first-class at the end of the last month, in the monthly examination in anatomy. I have also given satisfaction in my dissections. I only mention these memo as proofs that I am sincere in my endeavors to work. It would be an ignominy if I were to return home without anything to show for the money which has been spent upon me. I cannot help believing that Your Excellency, after earning to my humble appeal to stay and finish my course of studies. Pray pardon this intrusion and Believe me Your Excellency’s humble and obedient servant
Matthew Makalua

Makalua ends up staying in England, but is often asked to return to Hawai’i. In 1890, the Pacific Commercial Advertiser writes a column saying “that the Government request Makalua to return to this country and teach native Hawaiians the art of medicine; that the Government medical books be translated into he native language; that the government establish a medical school in this kingdom for native Hawaiians”.

He ends up graduating King’s College in 1892 with his bachelors in Medicine (MB) degree. He doesn’t just become the first Native Hawaiian to become a western doctor, he becomes a surgeon. However, he does not return home to practice medicine. At this point, he is already married to Anne Clementina Dewar, the daughter of an English doctor for about 4 years, as the two wed on August 27, 1888 at the Oratory, Brampton Road in London. They welcome a son into the world, Matthew James Makalua on August 8th, 1890, at Sussex Place, South Kensington. In 1893, Hawai’i’s government is illegally overthrown by the United States. Makalua feels he does not have a country to return to since the Americans have taken over. He later becomes a Naturalized British Citizen. On his naturalization records it listed him and his parents ethnicity as American (United States) which caught me off guard. While on this Hawaiian Youths Abroad trip and our visit to the British National Archives, I found a letter that Makalua wrote to the County Borough of Hastings: 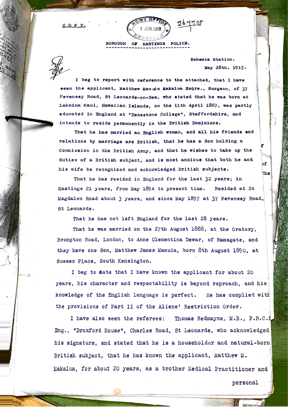 “The United States of America annexed the Islands. I have never claimed American citizenship, and indeed I had no wish to, considering I and most Hawaiians were forced to give up our independence. I believe that fact of annexation caused all Hawaiian subjects to become American subjects without further process. Therefore, I am at present technically an American- only technically. Since 1882 I have lived continuously in England. I married an English woman, all my friends of relation are British, I have a son holding a Commission in the British Army.”

Being away from home during the TMT happening in our own backyard is super hard. Hilo is my home, my piko. I used to wake up everyday and see Mauna Kea outside my window. For our own government, our own university to be advocates for this project is truly heartbreaking to me, to our kupuna, our lāhui, and our ʻāina. I am extra proud of the lāhui for coming together and protecting our sacred Mauna a Wākea. This opportunity to be abroad, following the footsteps of our kūpuna who came before us is such a huge honor and something that not everyone will be able to do. It opens my eyes to the world around us and helps me learn not only about Makalua and these others scholars we studied, but about myself. Matthew Makalua is such a huge inspiration to me and I want more people to learn his story. Although he did not return home to serve his country, he opened up his own practice in England. He may not have been serving our lāhui, but he still used his training to help others. He was well loved in England. We heard stories from people we met in Hastings saying that he often wouldn’t charge people for his services.

During my research, I had the honor of meeting Dr. Ben Young. I want to share a special mahalo to him and his wife, DeeDee, for being the first ones to find Matthew Makalua’s grave, setting the foundation for us to visit him today. Dr. Ben Young was the Dean of Students at John A. Burns School of Medicine and has helped many Hawaiians and Pacific Islanders get into medical school through the ʻImi Hoʻola Post-Baccalaureate Program. He is the first Native Hawaiian to become a psychiatrist. He wrote a piece documenting the practice of medicine by Native Hawaiians around the world, one of them being Matthew Makalua. Dr. Ben Young gave a presentation on Makalua during one of our classes and said something that really stuck out to me.

“It doesn’t matter if you are the first one to do something. As long as you are not the last.”

This speaks volumes to me because I am studying to become a doctor. Learning about Makalua’s story is inspiring and really motivates me to follow through with it and fulfill his duty to come home and practice medicine and serve our lāhui.

Visiting Makalua’s grave was a breathtaking experience. It repurposed my kuleana to be here and to be studying Makalua. From the letters I have read from him, his genealogy I was able to put together, to even finding his British Naturalization Certificate at the British Archives, there was so much ʻike to gain. Learning more about this brilliant kanaka was an honor, and for me to be able to share his story with others is humbling. We sang Kaulana Ke Kuahiwi to bring his home, Maui to him since he wasn’t able to return home. Emotions ran wild, as we were able to pay our respects to a true inspiration- Matthew Manuia Makalua.