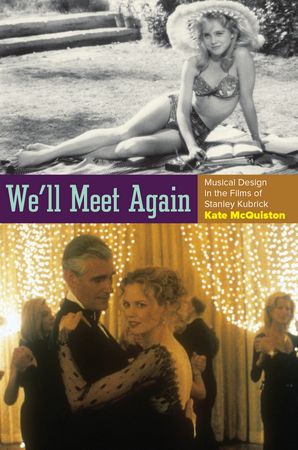 Unique and often startling encounters between music and the moving image in the films of Stanley Kubrick are trademarks of his style; witness the powerful effects of Strauss’s Also Sprach Zarathustra in 2001: A Space Odyssey and of Beethoven’s 9th Symphony in A Clockwork Orange, each excerpt vetted by Kubrick himself. We’ll Meet Again argues that, for Kubrick, music is neither post-production afterthought nor background nor incidental, but instead is core to films’ effects and meanings. The book first identifies the building blocks in Kubrick’s sonic world and illuminates the ways in which Kubrick uses them to support his characters and to define character relationships. It then delves into the effects of Kubrick’s signature musical techniques, including the use of texture, form, and inscription to render and reinforce psychological ideas and spectator responses. Finally it presents case studies that show how the history of the music plays a vital and dynamic role for the films. As a whole, the book locates Kubrick as a force in music reception history by examining the relationship between his musical choices and popular culture, and reveals the foundational role of music in his filmmaking.

This book tackles the musical aesthetic and practice of one of the most influential filmmakers in the post-classical period. The level of archival detail it engages in is impressive and stands to revise not just our understand of Kubrick’s films but the definition of auteurism and soundtrack compilation practice since the 1960s

Copies of McQuiston’s book are available from the publisher or Amazon.

Read the Kaunānā article about Dr. McQuiston and the book.