Voices of Aloha, UH Mānoa’s touring choir, looks forward to their biennium trip abroad with performances along the East Coast of Canada and continental United States this year. An ensemble of ambassadors, Voices of Aloha exist to bring their song to international audiences. Under the direction of Dr. Miguel Felipe, they provide augmentation of UH Mānoa student experiences and an elite artistic experience. 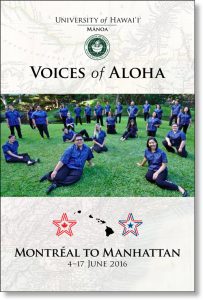 Performances for Voices of Aloha will include the Basilica de Notre Dame in Montréal, an evening feature concert in Burlington, as well as multiple days in New York City, Boston, and Portland, Maine. The program entitled “For You, A Lei” is a crafted series of vignettes each of which musically describe a portrait of life in Hawai‘i. From Filipino and Chinese music, Kamehameha Song Contest songs to church hymns, the program covers the breadth of heritage on the Hawaiian Islands.

UH Mānoa invites current chamber choir students and alumni to partake in the trip. From a pool of 130 capable choristers the list is shortened to roughly 30. It is a rewarding opportunity to those chosen, and one that the school works to subsidize through SAPFB funding, and various forms of fundraising. It is a bold venture with an ever shrinking price tag for students when support comes in from all across the community.