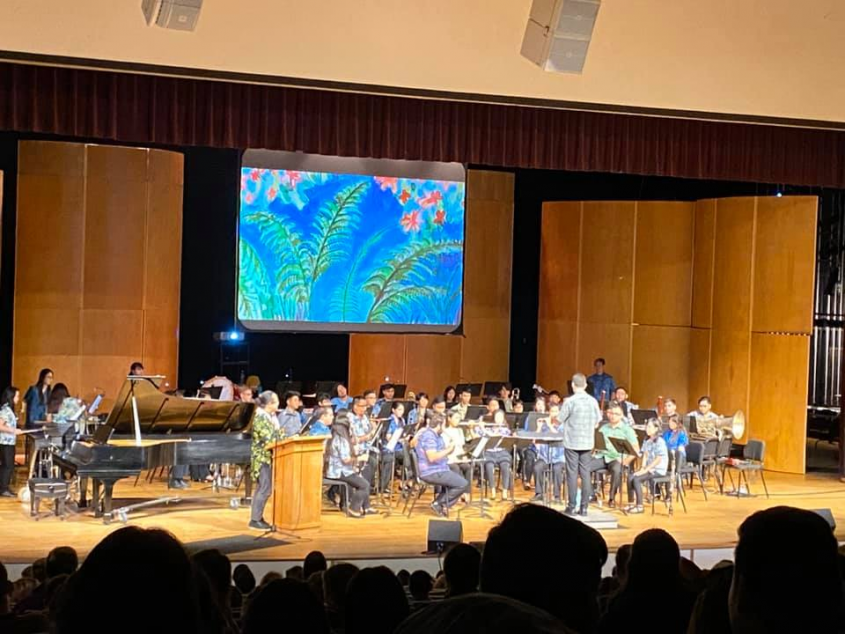 The UH Wind Ensemble, conducted by Dr. Jeffrey Boeckman, recently visited Kaua’i to perform three concerts of the Symphony of the Hawaiian Birds. The first concert took place on Sunday February 23, 2020 and was a standing-room-only ‘ohana concert. The other two keiki concerts took place on Monday February 24th, 2020. Dr. Boeckman said about the concert series, “The Sunday ‘ohana concert was also a benefit for the Kaua’i Forest Bird Recovery Project, a small but important group of folks who have working on bird conservation issues on Kaua’i for years. Between a silent auction and cash/checks, they received over $7,000 in donations that afternoon. After attending one of the keiki concerts, Kaua’i County Councilmember Luke A. Evslin reached out to the KFBRP, offering his assistance and asking for the group’s help in creating and drafting local policies and bills that would help native bird populations on Kaua’i.”

Members of the UH Wind Ensemble flew to Kaua’i to perform the Symphony of the Hawaiian Birds, a multi-movement work that brings together composers, animators, filmmakers, educators and others. Movements of the symphony were written by faculty from UH-Mānoa and UH-West Oʻahu: Takuma Itoh, Michael Foumai, Thomas Osborne, Jon Magnussen, Daniel Houglum, and Donald Womack. Hula was performed by UH-Mānoa Music Education students, and mele was sung by the UH Director of Choral Activities, Jace Saplan. Local animators provided animation for the symphony as well. A short film about the project can be seen here. This trip was funded in part by Hawai’i State Foundation on Culture and the Arts and the University of Hawai’i at Mānoa. Information on the Symphony of the Hawaiian Birds can be found here.