The University of Hawai‘i at Mānoa’s Department of Theatre and Dance is proud to present Stephen Sondheim’s artistic masterpiece Sunday in the Park with George, directed by department chair and professor of theatre Paul T. Mitri, on the Mainstage at Kennedy Theatre.

The musical follows Georges-Pierre Seurat, called George (played by Timothy Callais), as he creates his most famous work, A Sunday Afternoon on the Island of La Grande Jatte. Passions rise and relationships fall as George constantly chooses his art over Dot (Leiney Rigg), his longtime mistress and model. Eventually he must decide which is more important: his art or his love. The second act, set a century later, follows his great-grandson, also named George, as he follows in Seurat’s footsteps as an artist with a passion for color and light and the struggle to make meaningful, life-changing art in a dull, stagnant world.

This will not be the first time that Callais and Rigg play opposite each other. Callais, an MFA in Acting candidate who recently garnered a HSTC Po‘okela for last season’s Taming of the Shrew, is no stranger to the Hawai‘i theatre scene. He most recently appeared on stage as Julian Marsh in Diamond Head Theatre’s production of 42nd Street where he played across from Rigg in her role of Peggy Sawyer, for which she also won a Po‘okela award. Rigg most recently appeared as Princess Fiona in DHT’s Shrek. She concludes her studies at UH Mānoa this semester and her illustrious roles in Honoulu theatre with the iconic role of “Dot” on the Kennedy Theatre Mainstage.

Professor Laurence Paxton, chair of the Music Department and vocal assistant for Sunday, has personal ties to the piece. The last time that Sunday was produced on this island was in 1989 at DHT, where Paxton himself played the titular role. He says that the Sondheim masterpiece was like nothing seen before on this island. “Some people thought it was amazing, while others thought it was the weirdest thing they’d ever seen. But it had an impact, it made an impression” he recalls, “I think it was ahead of its time and just now is coming into its own.” When asked what he wants the audience to take away from this production, his answer is two-fold, “I want people to know that this isn’t a biography of Georges Seurat. 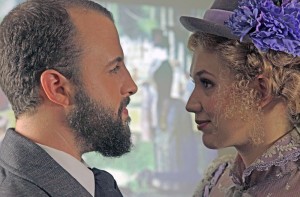 I believe he was chosen to emphasize the importnce of making decisions, regardless of knowing the outcome. He [Seurat] wasn’t famous until after he died. But this piece shows that he was true to himself and his choices, regardless of what others thought or said. You have to learn to make choices in life and move on.”

Mitri has high hopes for this landmark production in terms of collaboration, performance and its potential impact on the O‘ahu theatre community. The last time that the Music and Theatre Departments worked together was during last year’s hugely successful holiday extravaganza, A Mānoa Christmas, which combined music and theatre in one concert. “We’ve really tried to cultivate collaboration with the music department. We’ve forged ahead, despite continual budget cuts, because we need to showcase the amazing talent we have in people like Leiney and Tim.” And when asked what he hopes the audience gains from this production, Mitri states, “Sunday expresses that without great art to make us reflect on our lives we run into the danger of striving for petty, simple things. I want to remind people of that. Without art and reflection, our lives become shallow, nothing more than reality television. Theatre is better than that. People are bettter than that.”

EVENT
Sunday in the Park with George, music & lyrics by Stephen Sondheim, book by James Lapine

Ticket prices include all service fees.

PURCHASE INFO
Tickets are available starting Sep 14 online at etickethawaii.com, by phone at 808-944-2697, at participating outlets, and at the Kennedy Theatre box office. The box office is open from 10 a.m. to 1 p.m. Monday through Friday during show weeks, with extended​ hours on performance dates​.​