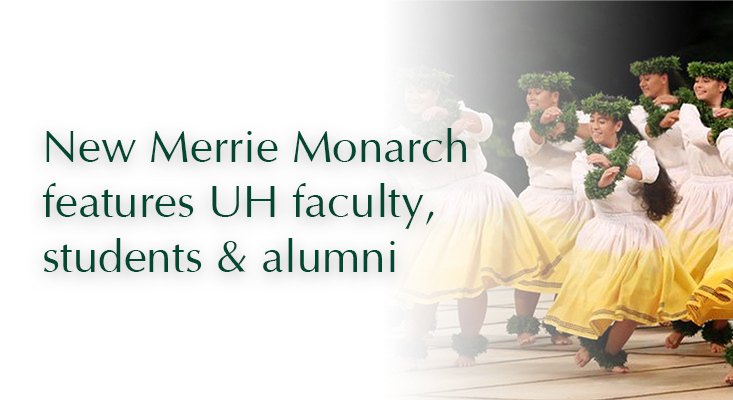 From ʻōlapa (dancer), competition judge to television host, numerous University of Hawaiʻi faculty, staff, students and alumni are among participants at the upcoming 58th annual Merrie Monarch Festival set to return to Hilo, Hawaiʻi June 24–26. Anticipation of the world-famous hula competition has continued to grow after organizers canceled the event in March 2020 as the COVID-19 pandemic first started to grip the globe.

To ensure the health and well-being of participants, organizers have implemented strict COVID-19 safety protocols, including a five-day quarantine, frequent rapid testing and no live audience or musicians. For the first time in festival history, ʻōlapa will perform in front of empty stands at the Edith Kanakaʻole Stadium. Kumu Hula Keawe Lopes, director of UH Mānoa Kawaihuelani Center for Hawaiian Language, and his wife Tracie Lopes (UH Mānoa alumna), will return to the stage with their hālau (hula school), Ka Lā ʻŌnohi Mai O Haʻehaʻe. The hula troupe is one of only 15 hālau entering this year.

Lopes’ ʻōlapa will dance Ke ʻŌʻili Mai Nei Ka Lā, a mele (chant) which depicts the proclamation of life. The traditional mele was selected to convey strength and well-being as the world continues to face uncertainty during the pandemic.

“It is our hope that as we engage the lyrical depictions of health with our hands, face, upper torso, poised demeanor, humble character and our heart, that our feet ‘kāwele’ or ‘wipe away’ the unsettling turning tide of our present predicament,” Lopes explained. “E ola nā iwi, e ola koa, may our very bones live and may we live long!”

Aside from a limited TV production crew, judges are the only other people allowed in the stadium during the hula performances. UH Mānoa music department lecturer Noenoelani Zuttermeister, will return to serve as an esteemed Merrie Monarch judge. The highly-respected kumu hula has been a festival judge since the 1980’s. She is excited participants will be able to experience some sense of normalcy after such a tough year.

“Energy is gonna be off the chart,” said Zuttermeister. “From the kumu to the hālau, they just want to get out and dance hula. That’s what they want to do.”

This year’s motto at Merrie Monarch is, E ola i ka hula, hula lives. Zuttermeister explained, “In other words, when we’re dancing it gives us life and it heals us.”

“We hope that this event brings a sense of rejuvenation and hope to our ʻohana hula around the world and specifically our ʻohana here in Hawaiʻi given the challenges we have all faced over the last year-and-a-half,” Kalili expressed. “We are a resilient people and place, so even more so, being able to return to the festival—even if it is more virtual than not—is part of our emerging from the challenges of the last year.”

Kalili and Boyd will provide live commentary during the TV broadcast on K5. Although judging will occur during each performance, winners will not be announced until the competition premieres on TV. Interviews with participants will be conducted through Zoom.