Prof. Richard S. Lum, UH Mānoa’s director of bands from 1960 to 1985 and professor of music, emeritus, passed the week of September 18th. It is with a heavy heart that we say goodbye to a man who profoundly impacted our university. Prof. Lum parts with a 90-year life well lived and rich musical legacy.

Prof. Lum played an integral part in the 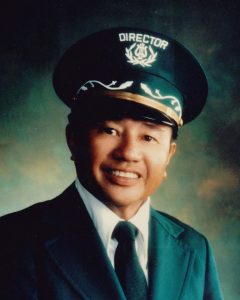 cultivation of band culture on O‘ahu and in Hawai‘i. He advocated for the improvement of band rehearsal spaces and better compensation for band directors. He formed the O‘ahu Band Directors Association and served as president of this organization and the Hawai‘i Music Educators Association. His time at UH Mānoa witnessed numerous invitations to guest conduct university and honors bands across the country, notably the United States of America Armed Services Bi-Centennial Band.

In recent years, the UH Bands honored Prof. Lum by establishing a scholarship in his name to support music students. Donations to that fund may be made in his memory by contacting Gwen Nakamura.