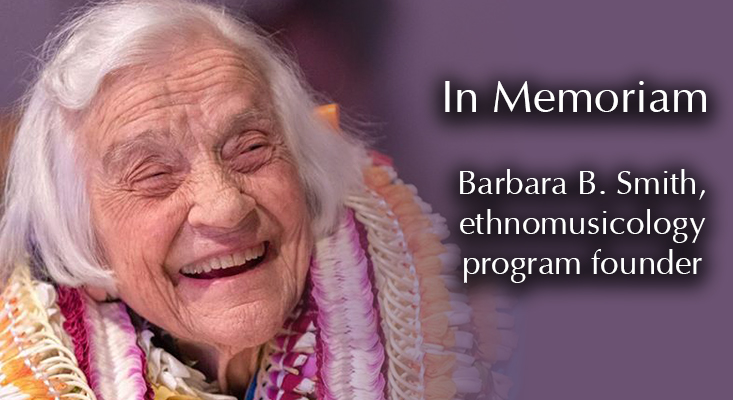 Long respected as a champion for the study of music and dance from Hawaiʻi, Asia and the Pacific, University of Hawaiʻi at Mānoa Professor Emerita Barbara Barnard Smith, who founded the university’s ethnomusicology program died on the evening of July 3. Colleagues and former students gathered to virtually celebrate the veteran professor’s 101st birthday on June 10.

Loved ones released this statement:
“She was a beloved colleague, teacher, mentor, and friend. Although we are saddened by her passing, we honor and celebrate a life well lived. One of her requests (instructions!) was ‘…and be sure to emphasize my long and amazingly wonderful life.’”

“Barbara was not only one of our most influential academic leaders but a highly engaged community member in Hawaiʻi and throughout the region,” said UH President David Lassner. “Iʻm one of the many whose life was touched by her work here. And her remarkable year-long 100th birthday celebration demonstrated just how deep her impact was around the world.”

“Barbara Smith was an extraordinary person who has touched so many lives as a mentor, an advocate for minority cultures, and a generous philanthropist,” said UH Mānoa Ethnomusicology and Asian Studies Professor Emeritus Ricardo D. Trimillos, one of Smith’s first graduate students. “For me she was all these, but above all she was a dear friend. Her passing is not a time for sadness, but a time to honor and celebrate a life well lived.”

“The Music Department is saddened by the recent news of Professor Barbara Smith’s passing. Professor Smith was to say the least an institution at the UH Mānoa Music Department,” said Laurence Paxton, Music Department chair. “Barbara established the ethnomusicology program here in the department. She then worked tirelessly to establish this new and vibrant field of study nationally and then internationally. The reputation of our ethnomusicology program soon received an international reputation around the world as the finest and most prestigious school of its kind. We here in the department celebrate Professor Smith’s accomplishments and salute her for a ‘life well lived.’ Her influence on students was extraordinary and her guidance and mentoring of new faculty in this field was legendary.

”Now it is our responsibility in our department, UH Mānoa and with all the UH campuses to continue her work and ensure that this program of cultural study continues to flourish far into the future. I, the music faculty and students will continue to remind everyone that the study of “world music” is an integral part of our mission here at UH. We will also encourage interdisciplinary studies with other likewise departments whose programs align with this important mission, aiding in building a robust reputation as a university of diversity, inclusion and celebration of the cultural arts of all nations. Barbara Smith began this auspicious work and now we need to maintain its validity and support its growth!” said Paxton.

A native of California, Smith began her career at UH Mānoa in 1949 teaching piano and music theory, after earning her master’s degree in music literature from the Eastman School of Music. She then became interested in her students’ diverse ethnic backgrounds, but realized that what they were learning was limited to Euro-American culture.

Smith, fondly known as “Miss Smith” to her students, learned to perform the music of various ethnicities and introduced classes in hula and Hawaiian chant, Korean dance, Chinese butterfly harp and Japanese gagaku (court music). A partnership with the East-West Center after the 1960s brought visiting scholars and performances of world music, dance and theater to Hawaiʻi, which resulted in the formation of master’s and doctorate programs in ethnomusicology at UH Mānoa.

UH Mānoa’s ethnomusicology program is internationally-recognized, and graduates have become advocates in culture and the arts throughout the U.S., Canada, Europe, and the Asia Pacific region. Among Smith’s earliest students were Herbert Ohta (Ohta-san) and Eddie Kamae, both recognized artists in the Hawaiian music industry.

After retiring from full-time teaching in 1982, Smith remained engaged with the university through fieldwork, research advocacy and mentoring international graduate students. She even continued mentoring dissertation students virtually during the COVID-19 pandemic.

Smith’s accolades include being named a “living treasure” by the UH Mānoa Colleges of Arts and Sciences; recognition as a “pioneer” by the Honolulu City Council; the 2018 Hawaiʻi Arts Alliance Alfred Preis Honor; and the Governor’s Award for the preservation of Hawaiian Language, Art and Culture.

To honor Smith’s wishes, there will be no memorial service. Her ashes will be scattered at her favorite surfing spot, as longboarding was a cherished pastime during her early years at UH Mānoa. Messages of condolence can be sent to her ʻohana through the professor’s email account barbaras@hawaii.edu. Donations in her memory can be made to the UH Foundation, the East-West Center arts program or the Museum of Ventura County.