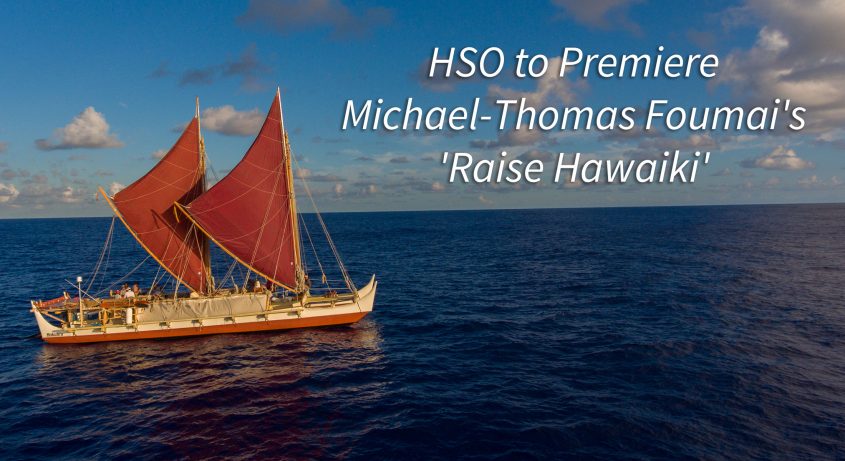 Dr. Michael-Thomas Foumai has been hard at work preparing for the world premiere of his new piece, Raise Hawaiki. “Raise Hawaiki” will be premiered by the Hawaiʻi Symphony Orchestra, Oʻahu Choral Society, University of Hawaiʻi at Mānoa Choirs, Hawaiʻi Youth Opera Chorus, and the choral programs at Kapiʻolani Community College and Windward Community College on March 28, 2019 at 7:30 at the Neil S. Blaisdell Concert Hall. In anticipation of the premiere, here is what Dr. Foumai has to say about his composition:

“Raise Hawaiki is a symphony for chorus and orchestra inspired by the story of Hōkūleʻa, a replica of an ancient Polynesian voyaging canoe and the reviving of traditional Polynesian navigation.

Hawaiki is the name of the mythical homeland of the Polynesian people and the phrase “Raise Hawaiki” has many meanings, which include the image of land rising from the horizon, an awakening Hawaiian consciousness, the Hawaiian god Maui pulling the Hawaiian islands from the sea with his fish hook, and the dream of legendary Hawaiian waterman, Eddie Aikau, of seeing Tahiti rise from the sea aboard the Hōkūleʻa. The title is taken from Aikau’s resolve to“Raise Hawaiki from the sea.”

The genesis of the work began in April of 2016 when I was commissioned by the Wallace, Elizabeth and Isabella Wong Family Foundation to compose a work celebrating the return of Hōkūleʻa from the worldwide voyage Mālama Honua the next year. Together with Elizabeth Wong and my colleague SaraLyn Smith at the UH Foundation, we developed the idea of a large-scale collaborative project that would bring together Hawaiʻi’s major institutions of performance, learning and voyaging. The idea was a symphony based on historian Sam Low’s book Hawaiki Rising, which documents the trials and triumphs of the beginning of Hōkūleʻa.

In April of 2017, we presented the idea of a Hōkūleʻa symphony to Nainoa Thompson (President of PVS and Hōkūleʻa Pwo Navigator) and we discussed the connections to music and navigation. He asked if some of the music could be performed when Hōkūleʻa returned and so I arranged a short chamber piece for strings and piano called Raise Hawaiki as a preview for a much larger symphonic work. It was premiered at the PVS homecoming gala Lei Kaʻapuni Honua (Lei Around the World) on June 19, 2017 and the performance featured faculty and alum from the UH Mānoa Music Department, including Iggy Jang, Dr. I-Bei Lin, Dr. Thomas Yee and myself.

There are two narratives in the eight movements of Raise Hawaiki. The first five movements speak to dawn of the Hawaiian Renaissance and it begins with a prayer to ancestors followed by navigation lessons between Nainoa Thompson and Mau Pialug, and concluding with the maiden voyage to Tahiti in 1976.

The final three movements speak to themes surrounding Eddie Aikau, the storm of 1978, the dream of Eddie to “Raise Hawaiki from the sea” for the future of our children and ends with a celebration of Mālama Honua with Eddie’s dream fulfilled.”