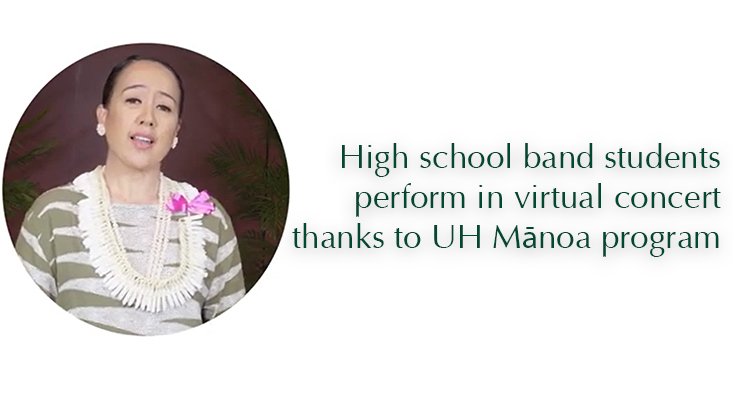 Giving back to the community is at the core of the University of Hawaiʻi at Mānoa band program and its generosity was on full display in March 2021. With many school band programs unable to meet in person for more than a year due to the COVID-19 pandemic, the UH Bands organized the first-ever Hawaiʻi high school virtual honor band, which released two video performances. Approximately 50 students representing 24 different high schools on four islands were selected to participate in the online event.

Students received instrumental lessons with UH Mānoa faculty, met and worked with guest composers, and talked with Hawaiʻi’s own singer/songwriter/musician Raiatea Helm about her career in music and the meaning behind the mele (song) Kaulana Nā Pua, which she performed with the students. They then individually recorded their own parts, which were assembled into video performances.

UH Mānoa Director of Bands Jeffrey Boeckman saw this as a chance for young musicians from across the islands isolated due to the pandemic, to come together and make meaningful music.

“It has been a long time for all of us away from each other,” Boeckman said. “From the connection that making music together can bring, we were eager to provide a meaningful musical activity. We are so fortunate to bring these young musicians together with an artist like Raiatea.”

The UH Bands acknowledged the Hawaiʻi State Foundation on Culture and the Arts for its support of the project.

This effort is an example of UH Mānoa’s goals of Enhancing Student Success (PDF) and Excellence in Research: Advancing the Research and Creative Work Enterprise (PDF), two of four goals identified in the 2015–25 Strategic Plan (PDF), updated in December 2020.