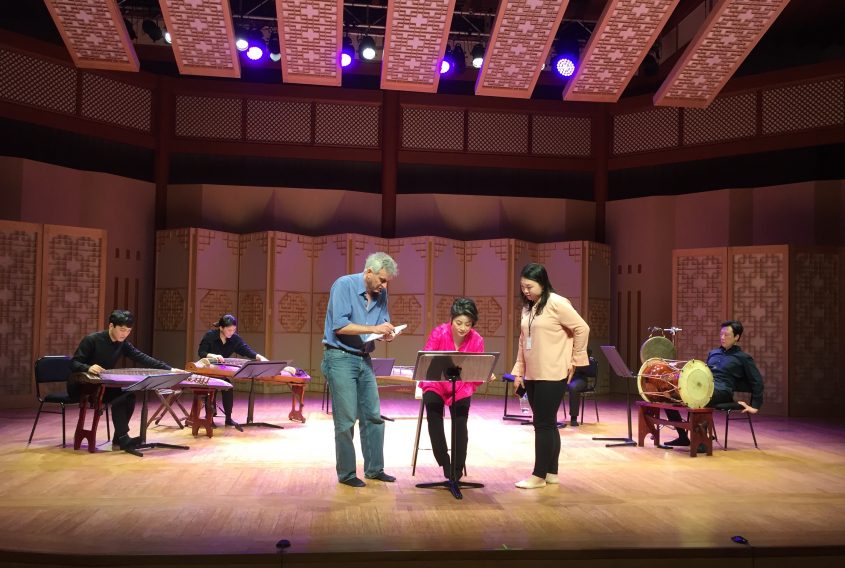 Faculty composer Donald Reid Womack recently had several premieres of new works in Korea. In April Womack’s Power Lines, a concerto for geomungo, was premiered by the Hong Kong New Music Ensemble and soloist Yoonjeong Heo at the Tongyeong International Music Festival, one of several works commissioned worldwide by the prestigious organization. Later that month, his Rippling Liquid Metal for piri and ensemble was premiered at the National Gugak Center in Seoul, alongside a performance of his Geumgang Jeondo for piri and janggu.

May brought more premieres, with gayageum virtuoso Seyeon Park presenting first performances of two commissioned works, Gumiho and Haetae, each based on characters from Korean mythology, again at the National Gugak Center, while Womack’s gayageum concerto Scattered Rhythms and soloist Jiyoung Yi were featured at the Seda y Madera: Traditional Meets Contemporary festival in Bogota, Colombia. Upcoming events include multiple performances of works in Seoul and Busan, as well as premieres of new works in Seoul and Tokyo.

The UH composition program, a world-leader in the burgeoning field of intercultural composition, has been particularly active in Korea of late. Womack and fellow faculty composer Thomas Osborne were named winners in the Gyeonggi Korean Orchestra International Composition Competition last fall, and each conducted the orchestra in the premieres of new concertos. Both composers are frequently performed, with several of their works having become new standard repertoire for Korean instruments.