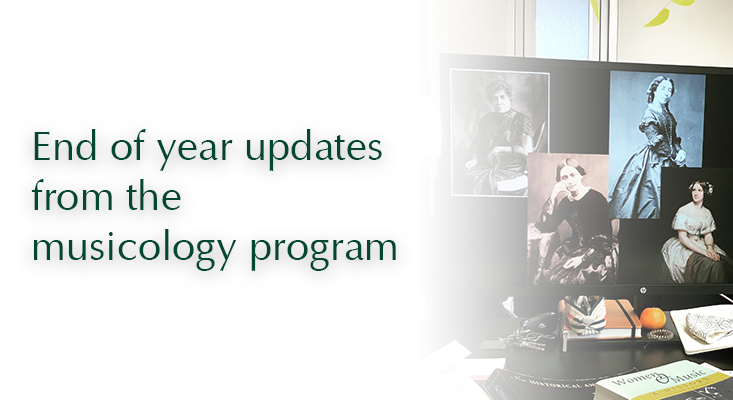 The Musicology area shares an update on what’s been happening in that program as we end the academic year:

Despite all of us tuning into class home and working on academic work from a variety of different places, the musicology area thrived in the academic year of 2020–21. Throughout the year there were many notable moments as we sat behind our Zoom screens and participated in a variety of different activities. Everyone stepped up to the plate to participate in one of the most peculiar years in modern higher education, and a few stand out for special mention. Because many of the achievements could not be celebrated in person, we will highlight here some of the brilliant achievements by the students of the Music Department who participated in musicological endeavors across several courses that were offered by the faculty.

In the fall semester, Johnette Martin defended her master’s thesis, “Musical Aesthetics in Alex North’s Score for The Bad Seed.” The thesis illuminates North’s musical sensitivity to the film’s central female character, and her struggle to fulfill society’s expectations of American women in the 1950s. Martin’s study also situates The Bad Seed in the context of horror scores across several decades. North’s film scoring is notable for both its use of pre-existing music and proliferation of original, lyrical themes.

MUS265 (History of Western Music to 1750) this year included a transcription exercise of Trecento Italian music. This assignment asked students to engage with original notation from the 1300s and attempt a modern transcription. The catch: there were only basic instructions for how the original ancient notation was meant to be read. Dr. Elina Hamilton asked students to use their musical intuition and instincts to decipher music that was written down nearly 700 years ago to learn how musicians of the past preserved their compositions. Honorable mention must be made to Tiffany Nakayama who worked out the notation puzzle nearly perfectly in the first try with very little help from the extra office hour meetings that were held in the week of the assignment. A final paper which explored the rise of instrumental music in Western Europe resulted in several outstanding essays: notable were the essays written by Cheré Costales, Rosie Mayne, and Ethan Stanfield.

In MUS266 (History of Western Music from 1750), the semester ended with a virtual visit from the 2021 Grawemeyer Award Winner Lei Liang who shared his sources of inspiration and personal stories to help us better understand the significance of contemporary compositions within a historical context. Assignments for this class included two separate essays that focused on the use of research with primary and secondary sources. In the first assignment students were asked to work with primary sources in translation and provide an original discussion of early sonata-form through writings of Heinrich Christoph Koch and the music of Guiseppi Galuppi and Wolfgang Amadeus Mozart. Clear and engaging historical observations were made especially by Ethan Stanfield, Tevin Takata, and Tracie Young.

In the spring, graduate students in MUS600D (History of Western Music Theory from the Ancients to Rameau) met weekly to discuss the history of music theory in pre-tonal Western Europe. Final projects included conference-style presentations and final papers on original research selected by students. Topics ranged from comparatives of Rameau’s music and his theoretical treatises, an investigation of compositional techniques in Ars Antiqua and Ars Nova theoretical texts, a quest to understand the progression of cadential endings, how legends and mythologies exist in medieval theory, the search for Tinctorius’ “learned ear,” and an investigation of music diagrams in medieval manuscripts containing Boethius’ De institutione musica. Honorable mention is given to Yingqi Zhao who wrote a paper titled “The Beatus servus and Medieval Theory-Practice Dilemma.” Zhao masterfully addressed the problematic use of chromatic pitches that appear in Gregorian chant to offer a fresh perspective that contributes a new understanding of how medieval music might have been perceived. She will receive the Achievement in Musicology for Best Paper Award 2020–21 for her contribution to the discipline of the history of music theory.