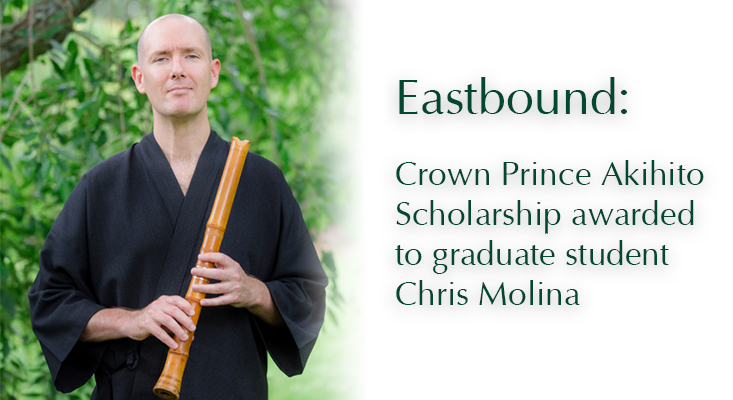 Christopher Molina, PhD candidate in Composition at UHM, has been named the recipient of the 2021-22 Crown Prince Akihito Scholarship. This highly-competitive scholarship is offered those whose studies and research intersect with Japan, and offers students the opportunity to travel to Japan in order to deepen their knowledge and experience.

The vision for the Crown Prince Akihito Scholarship Foundation is to positively impact the world through academic excellence. Scholars supported by the foundation represent diverse segments of industry and academia. Areas of specialization include history, economics, business, anthropology, culture, political science, sociology, religion, and philosophy.

We had the opportunity to virtually sit down with Chris to briefly hear his thoughts on this major achievement.

You have been to Japan before, correct?

Chris: Yes, I go to Japan as often as I can. Previously I was there as a doctoral fellow with the Japan Foundation. I returned to Hawaiʻi a year ago and now I’m going back.

Chris: One of the things Iʻm interested in is the inflection of the voice, and various intonations in foreign languages. Shakuhachi is an easy instrument to bend notes with. Also with the shakuhachi tradition there is a lot of imitation of nature: for example, pieces which vary between a musical melody and bird sounds.

What do you plan to do during your time in Japan?

Chris: My dissertation is partially an analysis of Japanese composer Toru Takemitsuʻs late concertos in the 1980s and 90s. Most scholars have overlooked that music because it tends to be more tonal, preferring to focus on his earlier works which hew closer to European modernism. But these late works are some of my favorite music. And for the dissertation I’m writing a concerto for shakuhachi and orchestra, so Takemitsu’s unconventional approach to concerto is a good influence.

When travel opens up I’ll return to Tokyo to work on the orchestration, and to seek feedback and criticism from Japanese scholars on my Takemitsu analysis. And of course I’ll continue working on my shakuhachi playing, hopefully together with the group of musicians I met two years ago.

How to do you feel by being a foreigner and playing an instrument like Shakuhachi?

Chris: Shakuhachi is one of those instruments that is succeeding internationally. And the shakuhachi community in Japan has been great in welcoming foreigners.

To learn more about Christopher’s work as a composer and performer, please visit —> https://www.youtube.com/user/stonechapelmusic/featured