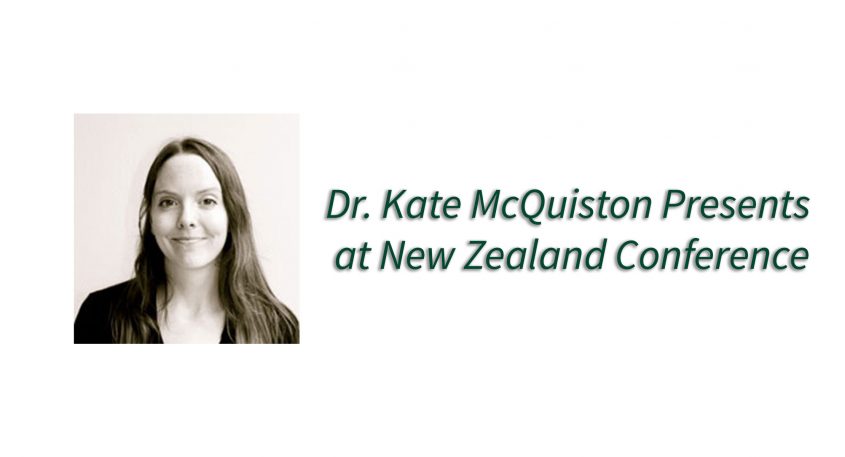 This past December 3rd, musicology faculty member Dr. Kate McQuiston presented her research at the Waikato Institute of Technology’s School of Media Arts in Hamilton, New Zealand. For the conference titled “Playing Along” Dr. McQuiston gave a talk titled “The Musical Character of Michel Gondry.” Here is what she has to say about the conference and her work:

“The conference theme of playing along proposed a refreshing elevation of forms of creativity that are explicitly derivative (like sampling, impersonation, remixes, covers, genre spoofs). The theme spoke to my curiosity about the aesthetics of music in film, a field in which there has been a pattern of praise and awarding for music that resembles its predecessors, rather than for ground-breaking or distinctive scores, or musical choices that cut against expectations in other ways. My paper was on Michel Gondry, a French film and video director, who wrote an original pop song for his latest feature film. The song itself mines many tropes and sounds from electropop and new wave songs of the late seventies and early eighties, and so it both engages the listener in a game of “name that tune,” and encourages the audience toward active musical creativity, specifically with pre-existing musical materials.”

In addition to her presentation, her work on Stanley Kubrick in her book We’ll Meet Again was featured in several print and online news media following the death of Douglas Rain, the voice of HAL 9000 in Kubrick’s 2001: A Space Odyssey. How her book touches on Rain can be read about here.