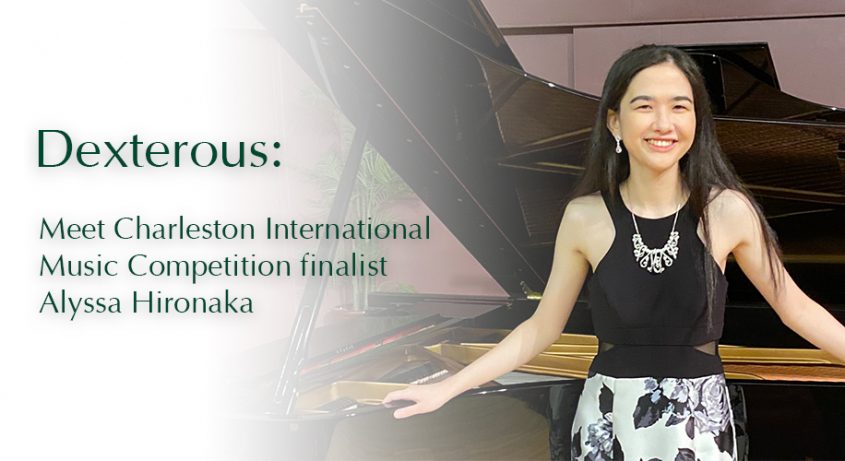 “It was a huge, but pleasant surprise. I received an email from the Charleston International Music Competition about this and initially thought that it was spam mail because I never gave them my email address before. I checked into the competition, found out that it was legitimate, and decided to participate since I could send them a recent video of mine that met the competition’s requirements. I sent it in, and then all of this happened. It was a fun and unforgettable experience that I enjoyed being a part of. I highly recommend looking into it and trying it out!”  – Alyssa Hironaka.

Honolulu native Alyssa Hironaka is a first year Master of Music student in Piano Performance at the University of Hawaiʻi at Mānoa, as well as a graduate assistant for the music department’s musicology area.

She is a student of Dr. Jonathan Korth and received her Bachelor of Music in Piano Performance in the Spring of 2020. Later that year, Alyssa entered the 2020 Charleston International Music Competition in the Fall Music Competition Category, which required its applicants to submit a performance of a piece written by a composer who was born in the months of September, October, or November. Her piece of choice was Au Lac de Wallenstadt from Années de pèlerinage: Première année: Suisse, S. 160 by Franz Liszt who was born on October 22, 1811.

The two-part competition included a preliminary round and a final round, where selected finalists had their submitted performances uploaded to the competition’s YouTube channel. Winners had their photo and bio published on the competition website, while both winners and teachers were each awarded a Charleston International Music Competition certificate. Alyssa passed the preliminary round, made it to the final round, and won second place for her age group. The winners were announced on Christmas Day.