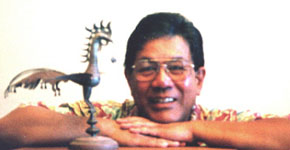 Dr. Trimillos is Professor was Ethnomusicology at the Music Department and Chair of Asian Studies at the School of Pacific & Asian Studies, University of Hawai’i at Mānoa in Honolulu, Hawai`i. His purview is broadly based and includes the expressive arts (music, dance, theatre) in their social environment. He has been consultant to a number of governments (including the former Soviet Union, Malaysia, the Philippines, and Hong Kong) in the area of arts and public policy. He lectures regularly at German universities.

His research foci include Asian peformance, Hawaiian music and dance, and the music of Muslim groups in the Southern Philippines. His theoretical emphases include ethnic identity, the arts and public policy, and issues of gender in the arts of the Pacific and Asia. He is a recognised resource for world music in public education.

His publications-in three languages-include articles on Asian-Americans, world music in higher education, cross-cultural implications for the arts, interrelationships of the arts, Philippine ritual, and Hawaiian music.

He is a scholar and a performer. His principal medium is the Japanese koto, with attention to avant garde works for the instrument. In February 1985 he premiered a concerto for koto with the Reading Symphony written by Honolulu composer Neil McKay. He performs regularly on the U.S. mainland; he has presented concerts of modern and traditional music in Europe, Japan, the Philippines and Australia. In 1989 he was musical director for a Filipino sarsuwela (operetta), in 1995 for the Japanese kabuki play Sukeroku and in 1999 for Natsu Matsuri, productions at the University of Hawai’i.

In 1994 he was Visiting Professor at UCLA as consultant to establish the new World Arts & Cultures Department. He also created a course on Asian-American expressive arts for Asian-American Studies there. He sits on the Editorial Board of Amerasia Journal. He has served as scholarly consultant to the Brooklyn Academy of Music and the Asia Society for projects concerning Asian and Asian-American performance. He is a past commissioner for the State Foundation on Culture & the Arts (Hawai`i) a national panelist for the NEA Heritage programs, and advisory board member for the Smithsonian Institution Folklife Center.

He is active in the local community. He founded and presented the preview series for the Honolulu Symphony. He has been consultant and participant for a number of film projects, including “Hawaiian Rainbow,” “Swingtime in Honolulu,” “Kumu Hula,” and “Ku’u Home.”

Courses he has taught at UHM in the area of Music included:

Publications reflecting his range of interests include: