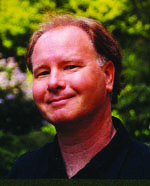 Jay W. Junker teaches traditional and commercial music in the ethnomusicology program. Courses include Music in Modern America, which he inherited from his mentor and frequent collaborator, Ricardo D. Trimillos, and A History of Rock & Roll, which he developed for the department in 1991. Open to all majors, Junker’s courses examine music as creative expression, commercial enterprise and meaningful cultural event. They tend to focus on issues relating to cultural preservation, cultural exchange, artistic innovation and the effects of technology. Junker’s favorite positive student evaluation, so far, is: “Jay is perfect and has no flaws.” His favorite negative student evaluation, so far, is: “This class was way too hard. He even made us go to the library.”

Outside the university, Junker enjoys documenting and promoting traditional musicians. He produces (with Stuart Yamane) a television series, Na Mele, for public television; organizes concerts for the Honolulu Academy of Arts; produces albums of traditional Hawaiian music for the Mountain Apple label; and sets up concert tours for local musicians to Europe. With pianist George Winston, Junker writes the extensive liner notes for the slack key masters series of albums on the Dancing Cat label. He has written and produced a number of video documentaries, including Ku`u Home: Hawaiian Songs of Home, and served as music consultant for numerous other productions. Radio programs he has created include Na Mele O Hawai`i (co-hosted with Haunani Apoliona), Pacific Visions (hosted by Keali`i Reichel); Musics of Hawai`i, and, for ten years, the Hawaiian Boogie series on Hawai`i Public Radio, which explored and celebrated links between blues, country, jazz, pop, gospel and related styles from around the globe.

Junker has contributed articles on a wide range of musical subjects to local, national and international publications, including Billboard, Musician and others. He has served as a consultant to the Smithsonian Institution, the Hawai`i State Foundation on Culture and the Arts, the BBC; Channel Four UK; NHK; National Public Radio; and others. Two of his favorite sayings, which he manages to work into lectures every semester, are “Music is never made in a vacuum” and “America’s music is more democratic than America’s people.”