Lecturer in Oboe and English Horn 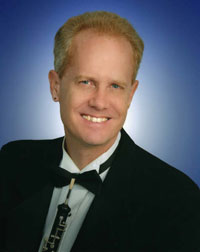 J. Scott Janusch has been Principal Oboe of the Hawaii (Honolulu) Symphony since 1987. He was a scholarship student at the Manhattan School of Music and the Cleveland Institute of Music where he earned his Bachelor and Master of Music degrees. His teachers include John Mack, Elaine Douvas, Henry Schuman and Marc Lifschey. Scott has also been the oboist in the Spring Wind Quintet since 1996 and also is the Education/Outreach Coordinator for Chamber Music Hawaii’s in-school and Community concerts and workshops.

Scott has also performed as Principal Oboe with the San Antonio Symphony and the Santa Barbara Symphony, where he was a featured soloist in April 2004. He was also appointed as Principal Oboe of the San Diego Symphony and Opera Orchestra for the 2001/2002 season and appointed to the same position in the Kansas City Symphony by Maestro Michael Stern for their 2010/2011 season. Scott has also been featured as a soloist with the Honolulu Symphony on six occasions performing the Mozart Oboe Concerto in 1990 and 2002, the Vivaldi d minor Concerto in 1999, the Bach Double Violin/Oboe Concerto and Mozart’s ‘Sinfonia Concertante’ in 2007, and the Strauss Oboe Concerto with Andreas Delfs conducting in 2008. Scott has performed with the Los Angeles Philharmonic at the Hollywood Bowl and participated in the Maui Chamber Music Festival, the Colorado Music Festival, the La Jolla Chamber Music Festival, and the Marlboro Music Festival in Vermont. Also a keyboard artist, Scott has performed on the piano, harpsichord, and celesta for the Honolulu Symphony, Ballet Hawaii, Chamber Music Hawaii, and for several faculty recitals at the University of Hawaii.