Creature of the Month Holidays 2020 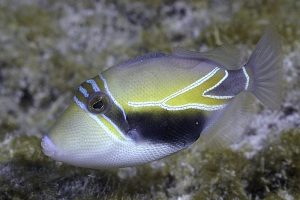 Close-up of a reef triggerfish. Photo by: zsispeo, Wikimedia Commons.

Rhinecanthus rectangulus, more commonly known as the reef triggerfish, has been the Hawaiian state fish since 1984. This fish is easily recognizable by its distinct patterns and unique body shape. The shape of its head earned the triggerfish its Hawaiian name, humuhumunukunukuāpuaʻa, meaning “triggerfish with a snout like a pig.”

In Hawaiian mythology, this fish was one of the forms that the demigod Kamapuaʻa could take. After a tempestuous relationship with the goddess of fire, Pele, the two fought, and Kamapuaʻa turned into the reef triggerfish to seek safety in the reef.

The reef triggerfish inhabits the shallow reefs of the Hawaiian Islands, where they browse the sea floor for food. Their sharp teeth and powerful jaws enable them to feed on a wide variety of ocean critters. An ideal meal includes algae, sea urchins, snails, brittlestars, worms, or crustaceans. When threatened, triggerfish have been observed responding with pig-like grunting sounds, potentially warning other triggerfish of danger. They also utilize their characteristic dorsal spine to lock themselves into small crevices, a behavior known as wedging. Wedging is used both as a defense tactic for predators and as a mechanism for resting in the shelter of the reef at night.

Although the reef triggerfish is not a preferred dish today, that was not always the case. Early Native Hawaiians used these versatile fish for a multitude of purposes, including meals, religious ceremonies, and even as cooking fuel when supplies ran low. While no longer a desirable food item, humuhumunukunukuāpuaʻa are a highly valued presence on the reef for their beauty.