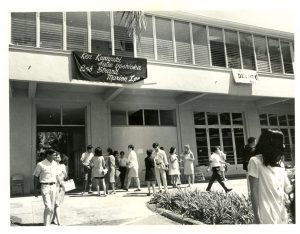 Masao Miyamoto, the youngest of five children, was born in Kona to coffee farmers. When he was six his parents moved to the Kaimukī area of Honolulu.1 Miyamoto had two life-long commitments outside his home: Scouting and photography. He joined Troop 10 of the Boy Scouts at age twelve in 1925, and completed the requirements for Eagle Scout in 1932. At around the same time, he became Assistant Scoutmaster of his troop. When the founding Scoutmaster of Troop 10 retired in 1945, Miyamoto became its second Scoutmaster 10, continuing in this position until April 12th, 1992.2

Scouting led Miyamoto to his second life-long career: photography. After learning photography in the Scouts, he continued his hobby during his student years at McKinley High School, where he was president of the photography club and photographer for the Daily Pinion. After graduating in 1932, he took a job with the silent movie library at the University of Hawaiʻi. Eventually he persuaded University officials to hire him as a photographer.3

Miyamoto began his career as official photographer for the University on April 1st, 1936. Over the next forty-one years he photographed four Presidents of the United States, eleven Presidents of the University of Hawaiʻi, and captured the images of numerous foreign dignitaries and national leaders, including President Sukarno of Indonesia, Madame Chiang Kai-shek, Professor Daisetsu Suzuki, Mr. Ralph Bunch, and Dr. Martin Luther King, Jr. Though Miyamoto officially retired on the last day of June 1977 he continued his photography work at the University, volunteering four hours per day for the next fourteen years. In February 1991, the Masao Miyamoto Photograph Collection—numbering approximately 70,000 negatives—came to the University Archives.

Masao Miyamoto passed away November 19th, 1995 at his home in Mānoa. Concerning his life, one of his former scouts said: “If anyone ever wonders whether or not a single person can make a difference in this world, they need only look at Masao Miyamoto and his life of service.”4

At the time the collection was donated the University Archivist decided to create another numbering system in order to store negatives efficiently by size and to expedite retrieval. This system involved sorting the collection according to the size of the negatives. These assigned item numbers begin with a capital letter representing the size of the negative, followed by two digits representing the year, a colon, and three digits for chronological ordering within each year. The letter “A” indicates 4 x 5″ negatives as well as some early odd sized negatives; the letter “B” indicates 120 mm negatives; and the letter “C” indicates 35 mm negatives.

For the viewing public, the major disadvantage of the Miyamoto Collection is that it includes only a scattering of positive prints. When prints are available, the archival staff pull them for patrons to view; but when only negatives exist, those are brought. Additionally, patrons using University Archives photographs must wear cotton gloves, supplied by the University Archives & Manuscripts Department.

These images were scanned from photographic negatives using the Library’s slide scanner. Click on the thumbnail to view larger versions of each image.