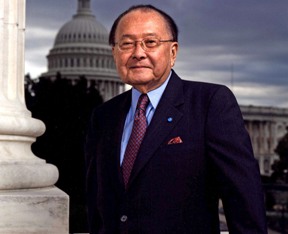 The son of Hyotaro and Kame Inouye, Daniel Ken Inouye was born in Honolulu, Hawaiʻi on September 7, 1924. He was a graduate of McKinley High School in Honolulu with ambitions on becoming a physician. Due to his interest in medicine, Inouye served as a medical volunteer during the December 7, 1941 attack on Pearl Harbor. He joined the United States Army after the enlistment ban was lifted for Japanese Americans. He served in the highly decorated 442nd Regimental Combat Team in Italy and France. Inouye lost his right arm in combat and was awarded the Congressional Medal of Honor, the Distinguished Service Cross, the Bronze Star, and the Purple Heart with Cluster for his heroism in combat.

With the loss of his right arm in combat, Inouye shifted his career interests from medicine to law. He graduated from the University of Hawaiʻi with a Bachelor of Arts in Political Science in 1950 and continued his education at George Washington University where he received the degree of Juris Doctor in 1953. He practiced law in Hawaiʻi before entering politics. Inouye was elected to the Hawaiʻi Territorial House of Representatives in 1953 and became the majority leader.

Inouye was elected to the U.S. House of Representatives and took office on August 21, 1959, the same day that Hawaiʻi became a state. Inouye was be re elected and served in the U.S. House of Representatives until 1962. He ran for the U. S. Senate and was elected in 1962. Senator Inouye was successfully re elected to the Senate until his death in 2012. In the Senate, Inouye became nationally known from his keynote speech at the 1968 Democratic National Convention and his service on the Senate Watergate Committee. He also served as the chair for the Senate Intelligence Committee, Senate Indian Affairs Committee, Senate Commerce Committee, and the powerful Senate Appropriations Committee. Toward the end of his tenure in the Senate, Inouye served as the President Pro Tempore from 2010-2012. 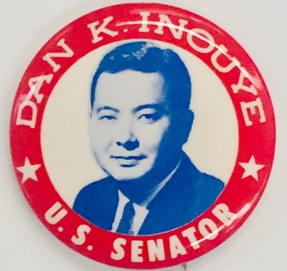 About the Daniel K. Inouye Papers

The Senator Daniel K. Inouye Papers encompasses records that document aspects of his personal life and political career. The political records in this collection follow Senator Inouye’s campaign for the House of Representatives through his tenure in the United States Senate.

The Senator’s personal life and military and political career before Congress are best documented in the Photograph and Personal Series. The Photograph (1923-2011) series contains black-and-white and color prints housed individually and in thematic albums. It contains photographs that document the Senator’s childhood and service in the United States Armed Forces highly decorated 442nd Regimental Infantry unit. The Personal series (1942-2013) contains personal correspondence as well as records relating to the Senator’s memorial services and burial.

Files related to the legislative process can be located in a number of series in the collection. The House records series covers the extent of Senator Inouye’s term in the United States Representatives. Papers relating to the Senator’s services in the United States Senate can be found in the Legislative Files (1963-2012), Project and Event files, and Staff Files (1987-2012) series. Files relating to the activities of the Senator’s congressional offices on Hawaiʻi and in Washington, D.C. are the Administrative Files (1963-2012), Staff Files, Subject Files (1963-2012), and Speeches (1963-2012). Much of the records in the Party Politics series were also created and maintained by Senator Inouye’s long time Administrative Assistant (chief of staff), Henry Giungi. While records relating to Senator Inouye’s committee work can be found in the papers, the official committee records remain with United States House of Representatives and Senate.

The Papers have been processed and are open for research. Please consult the Finding Aid for additional information on the materials, including more detailed series descriptions.

Portions of the Daniel K. Inouye Papers are being digitized and made available online. Series that have been digitized so far include