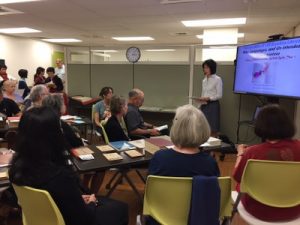 A diverse group of over 40 participants attended the 2nd Treasures at UH Hamilton Library Colloquia on November 1, 2017. The event was named “War, Languages, and Un/intended Consequences: from Diderot to after World War Two” and it introduced resources ranging from the 18th century encyclopedia (Diderot), to dictionaries and language learning textbooks across China, Japan, Korea, Russia, Southeast Asia, and the Philippines, as well as manuscripts and photos during the Occupation Period in Japan. Some participants commented that the event provided an opportunity to see firsthand the dynamic interactions and interwoven relationships among Asia and other parts of the world.

There will be an end-of-year BONUS colloquium by Debbie Dunn on December 6. Please stay tuned for a future announcement.