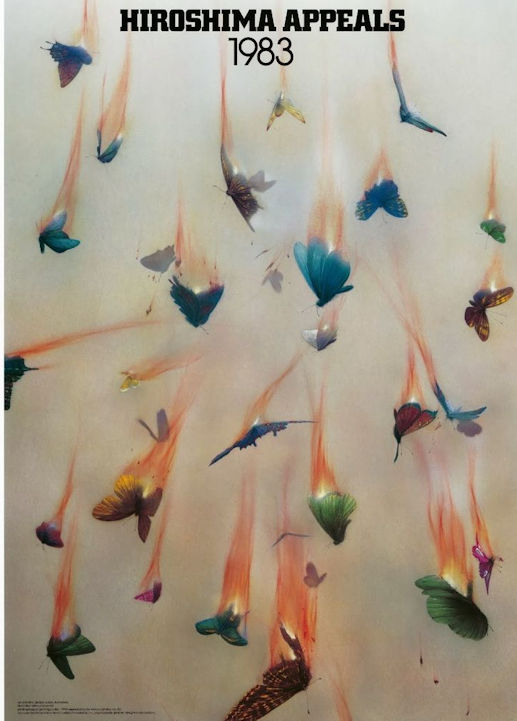 Extended and moved to the Library's main lobby.

On August 15, 1945 (Japan time), Japan accepted the terms of the Potsdam Declaration and surrendered to the allies, effectively ending World War II. This followed the United States' detonation of an atomic bomb over the city of Hiroshima on August 6, 1945, and the detonation of a second atomic bomb over the city of Nagasaki on August 9. Over one hundred thousand people were killed and the two cities were devastated.

In 1983, the Japan Graphic Designers Association (JAGDA) and the Hiroshima International Cultural Foundation announced their collaboration in launching the "Hiroshima Appeals" poster campaign, with the goal of remembering this devastation, and promoting peace at home and abroad. The first poster, entitled "Burning Butterflies" (shown above), was created by Yusaku Kamekura, then president of JAGDA. The project, conducted annually from 1983 to 1991, was reinstated in 2005 to commemorate the 60th anniversary of the end of World War II, producing one poster per year.

Shown here are some of these "Hiroshima Appeals" posters, along with other posters by Japanese artists that address nuclear war and the promotion of peace. The posters are taken from the permanent collections of the University of Hawaii at Manoa Library.