MENUMENU
About
Home > About > Exhibits > Drama at the University of Hawai’i: The Early Years

Drama at the University of Hawai'i: The Early Years

From very early in the life of College of Hawaiʻi, students have been involved in dramatic presentations. Students began presenting dramas during the first year after moving to the Mānoa campus, perhaps because finally in the Main Building, later named Hawaiʻi Hall, there was a larger room available. Most of the presentations, however, were scheduled for theaters off campus at Punahou, downtown or even in other parts of the Island.

Archival holdings help document the early dramas of the College/University of Hawaiʻi. Photographs from the OURD (Office of University Relations and Development) Collection have a rich documentation of plays filed under “Theatre.” The Associated Students of University of Hawaiʻi created a series of scrapbooks extending back into the years of the College of Hawaiʻi. The earliest volume of the scrapbook contains some programs, announcements and photographs of early dramas. A third valuable source for drama presentations during the late 1920s is a scrapbook created by Helmut Hoermann which is part of the Hoermann Memorabilia Collection. Additionally, beginning in 1916, the Associated Students of the College of Hawaiʻi began publishing the college/university yearbook, Ka Palapala. This resource works especially well in helping to date photographs, programs, and other materials, but can also be helpful in providing documentation where none other exists. Later collections which provide source material on the history of drama at the University of Hawaiʻi are the Joel Trapido Papers, the Earle Ernst Papers, and surprisingly, the President’s Office records (A1987:001, file: Department of Drama and Theatre). When processed and opened, the recent accession of papers of Dr. Terence Knapp should also enhance the resources for the history of drama at UH.

The early period in CH/UH drama, 1908 through 1929/1930, showed tremendous growth. In addition to the plays, beginning in 1920/21 academic year the University offered a course in drama that was taught during the spring term. Prior to that there was no academic support for the development of drama. The small genesis of this course produced a series of Dramatic Nights in the 1920s in which one-act plays written by students were produced. Some years, the Dramatic Nights consisted of competitions among the freshman, sophomore, junior and senior classes or among dormitories. Also, during this decade, the Dramatic Club began the practice of presenting plays each year from the Chinese and the Japanese traditions as well as a third play from the western world. Most of these years, the Dramatic Club also sponsored a play on a Hawaiian theme.

Limitations did exist. The most significant hindrance to the growth of drama at the University of Hawaiʻi in these years was the lack of facilities. There were no facilities dedicated to construction, storage and design of theatrical properties, and until the completion of Farrington Hall in 1930 there was no auditorium on campus in which the plays could be staged. Students did use the steps of Hawaiʻi Hall for the play House of Rimmon in November 1925, and one alumna indicated that students presented a Shakespearian comedy on the rear lanai of Hawaiʻi Hall before the stairs were built connecting the rear lanai with what would become the Varney Circle. Otherwise, dramatic productions had to be staged off campus: Bishop Memorial Hall and Dillingham Hall at Punahou School, Mission Memorial Hall and the Hawaiʻi Theatre downtown, among other places.

1930 signaled a significant year in the history of drama at the University of Hawaiʻi. That fall, Professor Arthur E. Wyman became Assistant Professor of Dramatics in the Department of English. That same semester marked the opening of Lecture Hall, later named Farrington Hall, which included facilities for theater work and a large lecture hall with a stage. Professor Wyman organized “Theatre Guild of Hawaiʻi” that same year, combining what had been the student Dramatic Club with interested persons from the community. The 1930s were therefore a significant period in the development of drama at the University. In the mid-1930s, Theatre Guild made another significant alteration in earlier practices. They decided that the cast membership of any play would be open to anyone regardless of ethnic background. Hence, Chinese, Japanese, Korean and haole students could try out and act in anyone of the various dramas, not just in the dramas of their own ethnic groups.

December 1941 changed drama at the University just as it changed everything else in Hawaiʻi and the nation. When the University reopened in February 1942, many students and faculty were gone. Professor Wyman numbered among the seventy plus faculty members listed in the 1942/1943 catalog as having resigned or being absent in war effort. The import of the war relegated many activities to unimportant status. The first play scheduled for that year had just begun rehearsals when the attack on Pearl Harbor occurred; dramatic events planned for the year were cancelled. Eventually, the United States Army Special Service Office, Entertainment Section, began presenting plays, musical reviews, etc., for the troops stationed on Oʻahu, using Farrington Hall for headquarters. The final section of this history of Drama at the University of Hawaiʻi focuses on the work of Captain Maurice Evans, a Shakespearean actor stationed at the University by the U.S. Army.

For the following images, clicking twice may be necessary to get to the best size and resolution for viewing, especially for text materials.  The exhibit does not include all the images available in the archives on any particular play, nor does it cover every play for which documentation in the Archives exists.


Cover to the program for Revolving Wedge. ASUH Scrapbook, I, pg. 8) 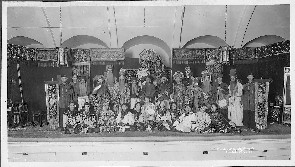 Yellow Jacket, presented 29 October 1921, by the Chinese Students’ Alliance which included students from among the high schools in Honolulu. (ASUH Scrapbook, I, pp75-77)

Cast of Arms and the Man in costume posing in front of Hawaiʻi Hall. (ASUH Scrapbook, I, p. 104)


Photograph of Poster created by student(s) to advertise Adam and Eva. The artist who drew the posters probably did work in Ka Palapala, 1923, the ASUH Yearbook, available in the University Archives Reading Room. (ASUH Scrapbook, I, p. 137)


Cast members of Mr. Pim Passes By on the set, with names written along bottom margin of photograph. (ASUH Scrapbook, I, p. 134)


Twelfth Night, presented 13-14 December 1928, featured an Elizabethan presentation one night and a modern adaptation the other night.

Part of the cast of Twelfth Night in costume for the modern presentation, posing on the steps of Hawaiʻi Hall. (Hoermann Memorabilia Collection, Scrapbook Box I)

Arthur E. “Doc” Wyman came to the University of Hawaiʻi as Assistant Professor of Dramatic Art within the English Department in 1930. (OURD Faculty/Staff photos, Wyman #1) 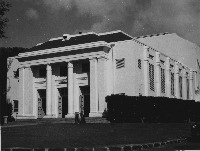 Farrington Hall, originally called Lecture Hall, provided the first theater venue on campus. Farrington was built in 1930 and ready for use fall semester of that year. (Miyamoto Photographs, A56:111)

Theatre Guild at UH presented The Faithful, by John Masefield, 6-7 May 1931 in Lecture Hall (Farrington Hall).The Faithful, based upon Chushinguru, tells the classic Japanese story of the forty-seven faithful followers of Lord Asano in avenging his death. (OURD_Drama_Faithful_Edgeworth_1)

UH presented the English language premier of Lord Tadanao, a Kabuki play by Iwara Hayashi, based on the novel by Kikuchi Kan, on 9-12 January 1935. This was the first English language performance of the play. (OURD_Drama_Tadanao_#22)

An example of the annual Chinese play presented by UH, Lady Precious Stream was adapted into English by S.I. Hsiung from an ancient Chinese drama. (OURD_Drama_LadyPreciousStream)

Richard of Bordeaux was originally scheduled with the hope that Mr. Morgan Farley, New York actor, would come to Honolulu to play the lead. When he could not do so, Belden Lyman, UH student, took the role of Richard opposite Marjorie Putnam, an exchange student from Mills College, as Queen Anne. The play took place 15-18 April 1936. (OURD_Drama_Richard of Bordeaux)

Gene Bell as Androcles removing the thorn from the paw of the Lion, played by Axel Silen, in George Bernard Shaw’s Androcles and the Lion presented during the academic year 1939/1940.  (OURD_Drama_Androcles_#1) 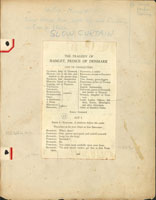 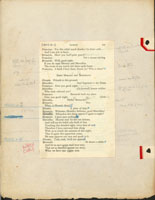 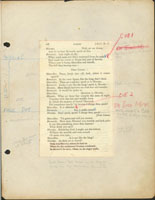