“American Archives Month: Diversity, A Part of the American Dream”

The University of Hawaiʻi has fostered diversity since its founding. Legislation by the Territorial Legislature specified that no one would be denied access on the basis of age, sex, race or nationality. Initial opposition to expanding the College of Hawaiʻi to the University of Hawaiʻi came in part from landed oligarchy wanting to keep various other racial and ethnic groups as plantation workers. Graduating class photographs demonstrate the diversity of the student body from the institution’s beginning despite this opposition.

Racial tensions have always existed both within the University and in the community at large. World War II brought racial issues forward as larger numbers of Mainland haoles came to the Islands as servicemen and civilian workers. Japanese American soldiers, called Americans of Japanese Ancestry (AJAs) at the time, found prejudice against them as well as surprising acceptance during their service on the Mainland and overseas.

This online exhibit draws upon several different collections from the department of Archives & Manuscripts. From the University Archives, Graduating Class Photographs show diversity in the student body and letters from the Confidential Research Files of the Romanzo Adams Social Research Laboratory explore experiences of AJAs during World War II. Photographs and documents from Hawaiʻi War Records Depository (HWRD), established by the Territorial Legislature in 1943, richly document World War II in Hawaiʻi. Two relatively new (as of 2009) collections in the department also contribute to this exhibit: the Japanese American Veterans Collection (JAVC) and the Hawaiʻi Congressional Papers Collections.

These materials and items from other collections could be seen on display in the John Troup Moir Jr. & Gertrude M.F. Moir Archives Reading Room on the 5th floor of the Hamilton Library Addition throughout the month of October, 2009. Contact the archives for access to any of these collections.

The changes resulting from the raising of College of Hawaiʻi to University status led to a sharp increase in enrollment and a reaction from certain leaders in Hawaiʻi to this liberal arts university. Graduating Class Photographs in the Archives show this increase dramatically. The class of 1917 had three graduates; the class of 1924, the first in which graduates attended all four years at the University of Hawaiʻi, had forty-seven. Graduating Class Photographs for the eight years in this span were displayed in the Moir Reading Room exhibit. For the reaction, see the Governor’s Advisory Committee on Education’s Survey of Schools and Industry in Hawaiʻi, Feb. 1931, which includes the Prosser Report to the Committee, in the Library’s Hawaiian Collection (call number LA2252 .A312 1931). The reports included therein called for severe restriction on enrollment, for the University to admit only a small number of high school graduates, and for most liberal arts students to attend Mainland institutions.

A chart created by Archives personnel showing the effects upon enrollment in UH of the legislature’s raising College of Hawaiʻi to University of Hawaiʻi, 1917-1926

The War Brides Interview Project involved interviews with women, usually from Axis nations, who had married military or civilian men from the United States shortly after World War II. These two images are the first pages of two interviews. Entire transcripts of these and other interviews were displayed in the exhibit in Moir Reading Room.


Letter from an AJA (American of Japanese Ancestry) soldier stationed at Camp McCoy, Wisconsin, 21 August 1942. The letter discusses anti-Japanese feeling and Japanese-American women in the Mainland United States in contrast with those from Hawaiʻi. (AJA 27a, Conf. Res. bx1,6)


V-mail was written, microfilmed, sent to the U.S. Mainland (and maybe to Hawaiʻi), printed out on a card roughly one quarter of the size of a standard sheet of paper, and finally delivered to the intended recipient. A piece of V-mail is shown on the left, and a typed (easier to read) version of the message appears on the right. Notice the censored portion of the letter in its fourth paragraph. (AJA 65b, Conf. Res. bx1,24) 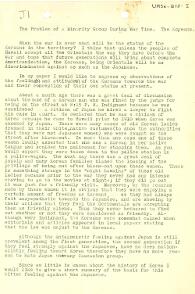 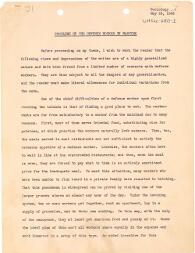 RASRL also contains extensive collections of papers written by students taking classes in the Laboratory.  The students wrote ethnographies and first hand accounts of their neighborhoods, family life, race relations, social structure, and after the Second World War, their war-time experiences.  These are the first pages of two of the hundreds of student papers in the collection.

World War II is often referred to as a “total war” in the United States, in which the efforts of everyone across the country were focused on winning the war. Hawaiʻi‘s diverse population heeded this call, and contributions to the war effort extended across racial, cultural, and gender lines. (HWRD Children’s Posters Drawer 1j) 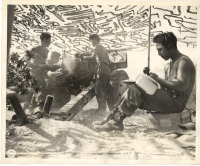 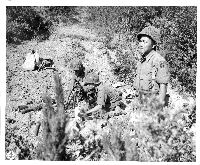 Hawaiʻi‘s diversity was reflected in the state’s members of the United States military. In 1942, the 100th Infantry Battalion was formed of Japanese American soldiers originally from the Territory’s 298th and 299th Infantry Regiments.  Later (in 1943), the 442nd Regimental Combat Team was formed as a Japanese American combat unit with soldiers from both Hawaiʻi and the Mainland.  These images show soldiers from the 442nd (left) and the 100th (right) fighting for their country in Italy. (HWRD Photos 1453 & 1441)


Recruitment posters like these encouraged Americans of Japanese Ancestry (AJAs) to enlist in the armed forces.  Efforts to recruit AJAs increased in early 1943 as a response to the good record of those already in the 100th Infantry Battalion. (HWRD Box 52)


In Hawaiʻi, citizens of all different races mobilized to help the war effort, organizing sales of war bonds aimed at specific subsets of the population.  These images from the Honolulu Star-Bulletin show war bond sales in the Korean (left) and Chinese (right) communities. (HWRD Photos 0214 & 0232) 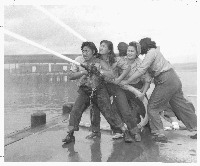 During the war, women served their country with a fervor matching that of men, volunteering in the military or the Red Cross, and through less formal channels by organizing scrap drives or charity mailings, working in pineapple fields, or tending victory gardens. (HWRD Photo 2166 & HWRD Children’s Posters Drawer 1j) 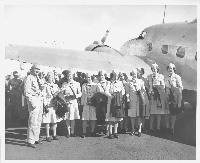 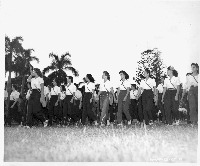 The Red Cross was a popular choice for women interested in doing their part to help the war effort.  The Hawaiʻi Chapter alone had thousands of volunteers. Within the organization, women of different backgrounds worked together in tasks as varied as folding bandages, assisting at war bond drives, and providing nursing services. (HWRD Children’s Posters Drawer 1j & File 59.02)

For more information on the Hawaiʻi War Records Depository, visit the HWRD Homepage.

JAVC has many U.S. Navy, Army and Signal Corps photos of World War II as well as many taken by individual soldiers. 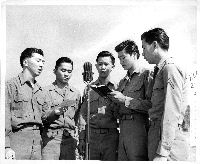 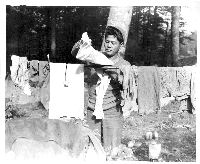 A soldier of the 100th Infantry Battalion hangs his laundry while in bivouac in the Chambois Sector, France, October 12, 1944. (HWRD Photo 1520) 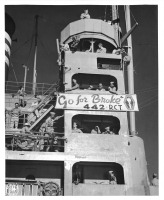 “Go for Broke” the slogan of the 442nd RCT, adorns the bridge of the transport USS Waterbury Victory upon its arrival in Honolulu, bringing the soldiers home from World War II, August 9, 1946. (HWRD Photo 1470) 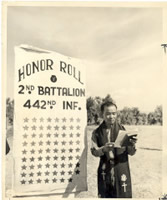 Hiro Higuchi of Hawaiʻi was one of two chaplains attached to the 442nd Regimental Combat Team, the all-Japanese American unit formed in January 1943. Following his enlistment, he attended the U.S. Army Chaplain School at Harvard University. In Nov. 1943, he joined the soldiers of the 442nd RCT for intensive training at Camp Shelby, Mississippi. In June 1944 Higuchi accompanied the 442nd RCT to Europe, where he served with the unit in Italy and France. JAVC has an extensive collection of Higuchi’s wartime letters. (HWRD Photo 1454)


For more information on the collections within JAVC, visit the JAVC Homepage.

SPARK M. MATSUNAGA PAPERS: 270 linear feet Matsunaga (1916-1990) served in the U.S. House of Representatives and the U.S. Senate for 14 years each and was a decorated veteran of World War II and the famed 100th Infantry Battalion.

OREN E. LONG MEMORABILIA: 6 linear feet Long (1889-1965) was one of the two first senators from the new state of Hawaiʻi and had formerly been Superintendent of Public Instruction for Hawaiʻi.

PATRICIA F. SAIKI PAPERS: 18 linear feet Saiki (1930—) was only the second woman from Hawaii to serve in the U.S. House of Representatives and became first woman to serve on the Amfac Board of Directors.


For more information on the Hawaiʻi Congressional Papers Collection, visit the HCPC Homepage.